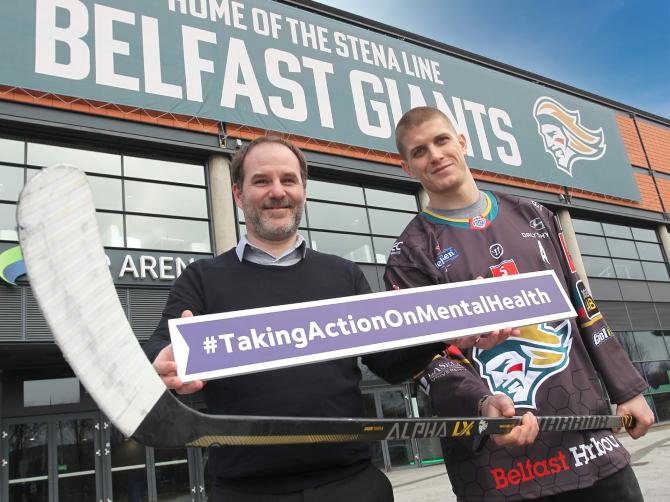 A Belfast Giant is taking a giant leap with Action Mental Health to help open up the conversation surrounding mental health by becoming a charity ambassador.

AMH’s newest supporter, Kevin Raine, has already shaved his head to raise thousands for the charity’s wide range of mental health initiatives for people of all ages across Northern Ireland. Now, the 29-year-old Canadian, who calls Belfast a second home, hopes to help spark important conversations around mental ill-health, in a bid to encourage people to speak up and seek support when they need it.

Commenting on the launch of the partnership with Action Mental Health, Kevin said: “I’m proud to develop my relationship with Action Mental Health. Since a young age I’ve struggled with my mental health. Prior to seeking help, I spent years of my life in my own isolation. I was convinced that seeking help was something I should be ashamed of and was in denial of my own pain.

“Finding inspiration in those sharing their own truths, I have since created a shift in my perspective. I no longer believe that to struggle means to be weak. Through teamwork and accountability, I’ve seen such a positive shift in my own personal growth. Having witnessed first-hand the impact this organisation has; I hope to inspire others that may benefit or find inspiration from my story to perhaps find the courage to follow my lead.”

Kevin, a native of Ontario Canada, has played with the Belfast Giants for four seasons and last September, he shaved his head in a brave fundraising effort for Action Mental Health. The event raised over £5,500, funds which directly benefit AMH’s diverse range of initiatives serving people of all ages across Northern Ireland.

Steve Thornton, head of hockey for the Belfast Giants added: “Kevin has been a hugely positive role model for our fans and has shown great courage and strength of character in opening up about his own struggles with mental health. We’re proud to support his new role as an ambassador for AMH, which will spark discussion and dialogue that will make a difference to the lives of local people living with mental health challenges.”

Action Mental Health’s Head of Communications and Fundraising, Jonathan Smyth welcomed Kevin into the AMH family: “We are so delighted to have Kevin on board as a committed supporter, whose efforts have already raised a significant amount of money for the charity, to bolster its diverse services for people from childhood to old age here in Northern Ireland. We now look forward to working with Kevin on lots of other projects, we hope his sporting profile will help to raise awareness of positive mental health and help break down enduring stigmas, that can still often prevent people seeking the help they need.”

Kevin is also the founder of Personal Best, a lifestyle brand that offers guidance, mentorship, exercise programming, and encouragement to individuals pursuing their very own Personal Best. Through Personal Best, Kevin has released a YouTube video series, featuring a range of interviews discussing mental health, with guests spanning from his own mother to teammates, mental health professionals, and more. The series also led to invitations for guest appearances on similar channels, all in the effort to spread positivity throughout all sections of society.

“I founded Personal Best with the concept that our greatest competition lies within, and that by focusing on ourselves while accessing appropriate support, we can reach our greatest potential,” explains Kevin. “As I continue to navigate my own challenges with mental health, I hope that sharing my journey will have a positive impact on those that are in a similar position. The support I have sought out, combined with my own accountability, has helped me to learn and progress. I hope that by encouraging openness, kindness, and compassion, we can both seek and offer support when times get tough.

Find Kevin on Instagram, @kevinraine and find out more about Personal Best, including Kevin’s interview series at: www.personalbesthockey.com/advocacy