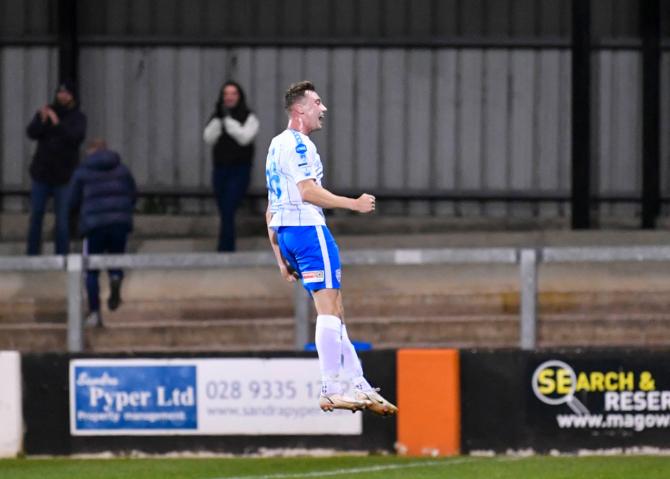 Coleraine's Matthew Shevlin celebrates after finding the back of the net at the Loughshore Hotel Arena, Carrickfergus Photo Andrew McCarroll/ Pacemaker Press

COLERAINE progressed into the quarter-final stage of the BetMcLean League Cup as a goal in each saw off Carrick Rangers at the Belfast Loughshore Hotel Arena.

In truth, it wasn't a game for the purist but Coleraine will be delighted at ensuring their name will be in the hat for the next round.

Bannsiders boss Oran Kearney made three changes to his starting line-up as Adam Mullan, Ronan Wilson and Jamie Glackin were drafted in at the expense of Aaron Traynor, Conor McKendry and Eoin Bradley.

In just the fourth ever meeting between the two clubs in the competition, it would be the holders who would strike first on 12 minutes. A long ball down the right flank was picked up by Cathair Friel who burst forward and crossed into the box for the onrushing Glackin. The midfielder timed a perfect header into the path of Matthew Shevlin who struck the ball past Neil Shields.

The first-half would see a lack of clear cut chances with Carrick's best opportunity arriving on 33 minutes as Gareth Deane was penalised for handling outside the box from Stephen O'Donnell's back pass. The resulting close range free-kick from Mark Surgenor was deflected inches wide of the near post.

After securing the half-time lead, Coleraine thought they went further ahead on 66 minutes as Josh Carson picked up possession inside the area, and after seeing his initial effort saved by Shields, the midfielder would then be denied at the second attempt by the alert Jim Ervin.

Both managers changed things up with numerous substitutions and it nearly paid dividends for the Stripes on 70 minutes. A long ball up the park caused a defensive mix-up between Ervin and 'keeper Shields, with Eoin Bradley's first touch seeing a delicate lob going wide of the near post.

However, Coleraine would get the job done on 82 minutes as Aaron Traynor's throw-in was mistakenly flicked goalwards by Carrick defender Mark Surgenor. The instinctive Shevlin was there again to steer the ball into the back of the net for his eighth goal of the campaign.

At the death, the Amber Army would be given a lifeline back into the contest as referee Ross Dunlop pointed to the spot after Emmett McGuckin went to ground under the challenge of Deane. The spot kick would be taken by Surgenor but the Carrick captain would be denied by Deane who dived the right way.

A job well done for Coleraine who know a tough assignment awaits against Glentoran this Saturday.