Podium for Rowan on Finland debut 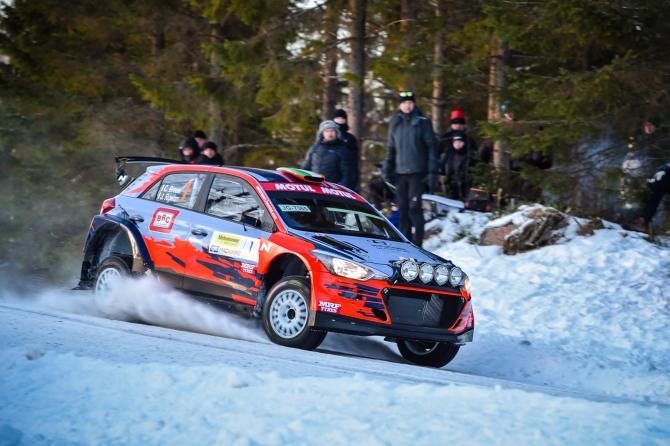 Craig Breen and John Rowan on their way to third overall.

CUSHENDALL'S John Rowan headed for home at the weekend with some extra weight in his hand luggage after finishing among the podium places on the SM Eastern Rally alongside Craig Breen.

On each of the five tests Breen and Rowan put their Hyundai i20 R5 among the top-five overall stage times as they kept pace with the local crews around them. Emil Lindholm was the eventual winner by 6.7 seconds from Teemu Asunmaa.

It was the first time that Breen and Rowan competed in the event and the first time they shared the stages as Breen's regular team-mate, Paul Nagle, was unavailable for the third round of the Finnish National Championship.

"The speed here has been very high, so to come third overall and to be this close [to the front two] is definitely encouraging," said Breen, whose focus this season is the European Rally Championship - a competition he finished runner-up in back in 2015.

"The first round of that is in a few weeks' time. It has been a while since I was there but I have some good memories."

Breen was full of praise for the tyre on what was essentially a development exercise for MRF's effort at a studded snow/ice tyre. "It has been a really good day," he said, "especially when you consider this is the first time we have used the tyre in competition.

"To have only done a few kilometres on the tyre, and for it to be so competitive, means things are looking good for the future."