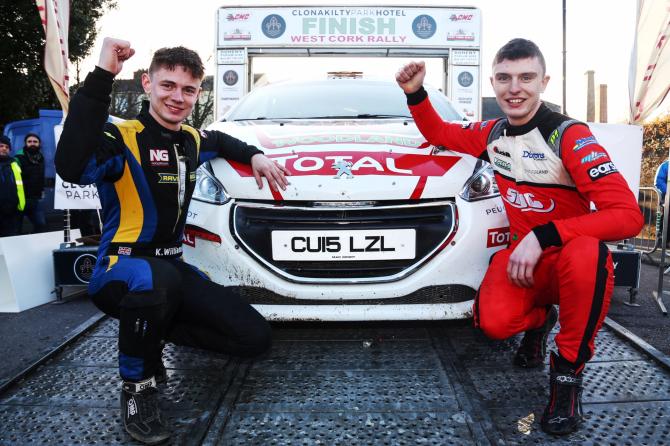 KILREA’S JOSH McErlean has safely made it through to the final of next month’s Billy Coleman Award where the overall winner will receive a cheque worth €100,000 for the 2020 season.

Interviews took place at Motorsport Ireland’s headquarters in Dublin yesterday to whittle the nine nominees down to just three. The other finalists are David Kelly, who enjoyed victories in the Junior section of the Cavan and Fastnest rallies and Midland Stages, and Derek Mackarel who triumphed in Class 16 A of the Irish Forest Championship at the wheel of a Vauxhall Nova.

McErlean is the bookies’ favourite to lift the prestigious trophy given his title-winning drives in the Junior British Rally Championship which included maximum scores on the Pirelli Rally and his home event, the Ulster Rally. These all came aboard his family-run Peugeot 208 R2.

He has since gone on to make the step up to a Hyundai i20 R5 car, which he used on the UK’s round of the World Championship. He will be reunited with it for next month’s Monza Rally.

The President of Motorsport Ireland, John Naylor, said that each of the nine nominees were of outstanding calibre, adding: "David, Derek and Josh are thoroughly deserving finalists".

A judging panel that consisted of representatives from Irish motorsport, Sport Ireland and a number of Irish media outlets, played a hand in choosing the Billy Coleman Award finalists.

The overall winner will be announced at the MIS Motorsport Champions of Irish Motorsport Awards ceremony on December 10 at the City West Hotel in Dublin. The two runners-up will not leave empty-handed, with each receiving a cheque for €15,000 to assist their 2020 plans.

*Keep up to date with all the latest Motorsport news with The Chronicle.