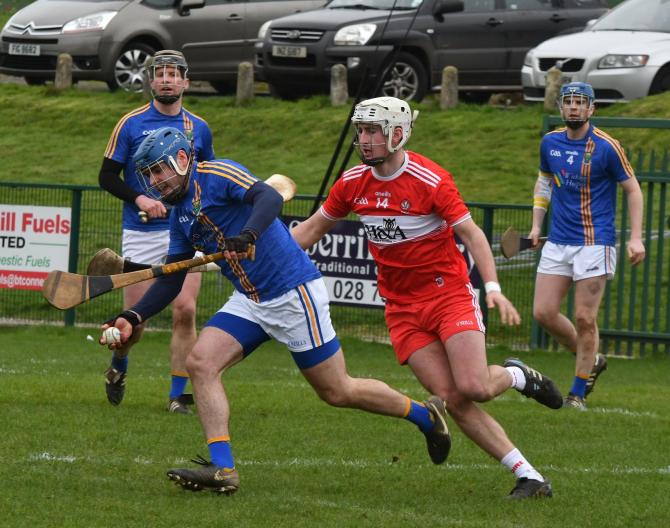 Action from Derry’s clash against Wicklow.

DO NOT mention Wicklow to the Derry hurlers, they must be sick at the sight of them.

A week earlier at Ballinascreen the men from the Garden County stopped Derry’s bid for five wins in a row with a 2-16 to 0-16 victory. That result deemed that the teams would meet in the league final.

It was like a freezer at Inniskeen County Monaghan on Sunday. Inniskeen is the birthplace of the famed poet Patrick Kavanagh but there was little poetry in motion about this scrappy game in near unplayable conditions. Derry fluffed a host of chances, Wicklow made the most of theirs and a 64th minute goal from sub Michael Boland meant that Derry’s hopes of promotion were gone.

It was a lack of scoring power that was Derry’s downfall. Just eight points at this level and four of them from frees tells its own tale. The absence of the injured Cormac O’Doherty reduces the Derry scoring potential considerably. The starting Derry forward line scored just two points from open play. Dual player Brendan Rogers came off the bench in the 26th minute for the injured Brian Og McGilligan and got two points from play.