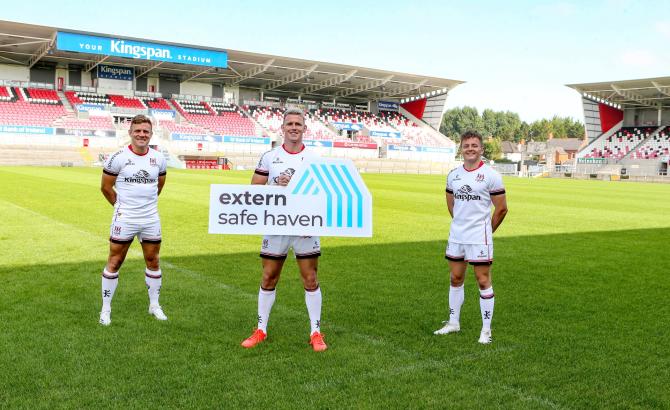 ULSTER Rugby has teamed up with Extern as its official charity partner for a third year running to continue supporting its work in tackling mental health challenges among the most vulnerable people in Ulster.

Extern supports around 17,000 people across the province every year through dozens of projects in the areas of mental health, homelessness, problem drug and alcohol usage, Traveller health, family support and youth services, among others.

The extended partnership, announced today, recognises the impact of COVID-19 on planned activity by the charity over the past 18 months and, more significantly, the ongoing impact on people’s mental health as society seeks to recover from the pandemic.

The main areas of focus for the partnership over the next year will be on continuing to promote Extern’s mental health services and highlighting the importance of sport and team activities in tackling loneliness and mental health challenges.

The partnership will further highlight Extern’s Safe Haven fundraising appeal, which aims to raise vital funds to support Extern’s respite centres for young people across both Northern Ireland and the Republic of Ireland.

Ulster fans can also expect a fun calendar of activities which will tie in with the return of the rugby season. Previous activities organised between the two organisations have included a special Drop the Mask event at Kingspan Stadium to raise awareness of men’s mental health and meet-and-greet events with young people who are engaged with Extern’s youth services.

Danny McQuillan, Interim CEO of Extern, welcomed the renewed partnership announcement, saying: “We are delighted that this fantastic relationship with Ulster Rugby will be continuing for another year, as they have been much-valued supporters of our work over the past two years. Their support has been of particular value in raising awareness and funds for our Hardship Appeal, which was activated in response to the rapid onset of Covid in March 2020.

“As we begin to see the easing of restrictions and the reopening of society, we hope that this partnership will offer us many more opportunities to work together over the next 12 months.

“Many of our frontline staff in Extern know how beneficial sport and physical activity can be for those tackling mental health issues, as well as for intervening positively in the lives of young people, particularly at our Safe Haven respite centres. We have no doubt that Ulster Rugby will continue to provide plenty of inspiration for this work over the coming year.”

Jonny Petrie, Ulster Rugby CEO, said: “We are delighted to have the opportunity to continue working alongside Extern in the year ahead. Given the impact of the pandemic on the activity we had planned, we felt it was important to extend our partnership for a further year.

“As a result, we can bring further awareness to the vital, and often life-saving, work that Extern carry out. It feels that prioritising mental health is more important than ever and, as the governing body for rugby across Ulster, we want to show how mental and physical health work in tandem.

“With a number of activations already in the diary, including at the upcoming pre-season game against Saracens at Kingspan Stadium, I look forward to Ulster Rugby standing alongside Extern in the year ahead as they continue to support those who need it most across our province.”

Extern staff and volunteers will be present at Ulster’s match against Saracens on Friday 3 September (KO 7pm) to encourage donations from supporters in aid of Extern’s projects, as well as hosting a special ‘Safe Space’ for people to find out more about the charity’s work.