Coleraine Firsts are in seventh heaven 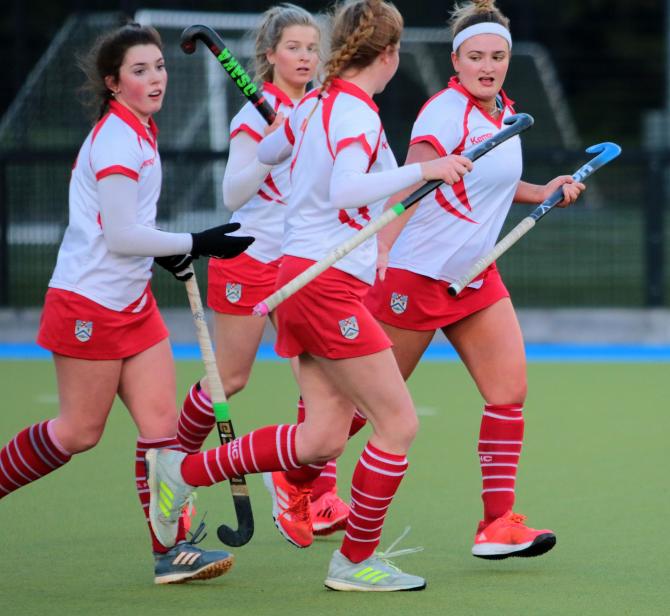 COLERAINE FIRST XI hosted Club KV on Saturday past - a week after playing them away in the Senior Cup.
Inside the opening 10 minutes of the game Coleraine were able to capitalise on a sleepy KV defence, scoring from a short corner by Kelly Watt who calmly slotted the ball in the goal.
The second goal from the hosts came shortly after and followed good build-up play by forward Eva Gaston. She passed the ball to Zara Craig who, with great composure, took it on her reverse to find the goal.
The second quarter went the way of the visitors, as they began to find their feet after a shaky first quarter.
Not dissimilar to the previous week’s match, their only goal came from a short corner where, after some scrappy play, they found the backboard to make it 2-1.
With the danger of levelling, the home side tried to get some distance between themselves and KV, which came in the form of another short corner courtesy of Helen Tweedie who placed the ball into the corner after a one-two with Eva Gaston.
The second half belonged to Coleraine as they looked to pounce on any stray passes made by the travelling side.
A quick overturn of possession by Kelly Watt, who gave a short pass to Eva Gaston, picked out Rebekah Lockhart on the penalty spot and she slapped the ball home into an empty goal.
With strong momentum in the game, Coleraine were sure to get a few more before the final whistle.
At the end of the third quarter another midfielder got her name on the scoresheet - Amy Symington - after jabbing the ball over the line through yet another short corner to extend the hosts’ lead.
In a league where goal difference could be vital, Coleraine pushed on desperate to match their score from the previous week.
A sturdy defence of Olivia Aughey, Kenya McCartney, Charlotte Carson and Jess Small saw any loose balls picked up, giving the midfield of Rebekah Lockhart, Amy Symington, Kelly Watt and Helen Tweedie opportunities to strive forward into the circle.
After a scrappy piece of play in midfield, Lockhart ran out with the ball and managed to find a pass to Craig who returned it inch perfect for Lockhart to score for a second time in the match.
With only minutes to go, Coleraine matched their tally of seven goals after Craig picked up her second of the match with a similar tap-in from a short corner breakdown.
“Coleraine would like to thank the umpires and supporters for coming out in adverse conditions,” said a team spokesperson.
This Saturday (December 4) Coleraine are away to Bangor LHC.