Ireland within one win of World Cup qualification 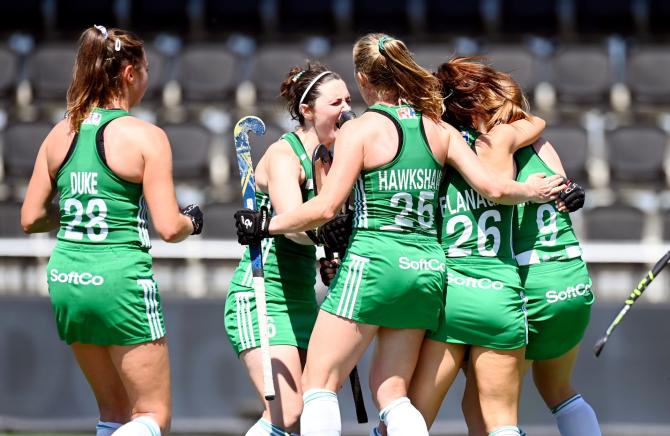 NAOMI Carroll netted a 46th minute winner to put Ireland within one win of World Cup qualification as her single goal saw off Scotland on day two of the EuroHockey Championships in Amsterdam.
She batted home her 25th international strike but a first goal since June 3 2018 – also against Scotland – before her ACL injury left her on the Green Army sidelines until this year.
Carroll did not recall that previous strike but was suitably thrilled to be back in the mix on this stage and picking up all the points from a tricky battle in the searing heat.
“I thought we started really well, created chances,” was the Cratloe woman’s assessment of the game.
“As long as they held us at 0-0, it does get tougher. You try to stay patient and hope that it will come. But there’s times in the past when it didn’t come. We stayed calm, persevered and got those three points that we were after today.”
The tie was a far cry from the opening group game against the world number ones the Netherlands, a tight physical contest between two closely matched sides.
Indeed, there were echoes of 2017 when the two sides played out a 0-0 draw at the same stage of the same competition in the same stadium.
And this one was looking to follow a similar pattern of Irish upper-hand but no killer touch until Carroll’s fateful intervention.
And Nikki Evans said the side – with 10 players still in situ – learned enough from that day to see this one out.
“We have experience among the team and a lot of that side from 2017 was there today. He just encouraged us to keep playing, keep playing, keep pushing. We did that and I am really proud of the girls for digging in deep.”
She was celebrating her 200th cap, becoming just the sixth woman to do so after Nikki Symmons, Shirley McCay, Cliodhna Sargent, Chloe Watkins and Anna O’Flanagan.
And she was grateful that restrictions had been lifted enough for her to be able to share the moment with her parents in the stands.
“To get one cap for your country is a dream come true. To get 200 with some of my best friends, I am incredibly grateful for the memories and to have my parents here today was really special!
“I was surprised to see them – I am not going to lie. I wasn’t sure of their whearabouts or what their plans were but I could spot them today from a mile away in the Monday morning crowd.
“It is as much for my family and friends who have been there along the journey with me and I delighted to share it with them.”
The first half saw the Green Army make the most telling inroads but the crucial touch was just out of reach on a number of occasions.
Sarah Hawkshaw’s driving runs were a feature throughout while Carroll’s nimble feet were always a threat. Anna O’Flanagan was in the thick of things in the first minute from Carroll’s slip pass but Amy Gibson was out quickly to smother the chance.
Evans was also denied an opening goal but she just could not get enough lift over Gibson when set through down the left.
Scotland were sitting deep and playing a longer game, requiring Hannah Matthews to be on hand to pick off important late tackles. McKenzie Bell did almost prosper on the counter but for Duke covering back to block the chance.
The second quarter followed a similar pattern with Hawkshaw racing down the right but her cross only got half a touch in front of goal; a Mullan cross took a Scottish stick and rolled wide. Ireland’s first penalty corner was won by Michelle Carey but no shot of note materialised.
The third quarter brought the first corner chances, Lena Tice and Róisín Upton combining to clear Scotland’s first-up effort from Emily Dark before Ireland could not make full use of the three that came their way.
From the fourth set piece – Hawkshaw again to the fore in its creation – the goal finally came as Carroll snapped up the chance at the second attempt. Róisín Upton’s drag was blocked by the first runner but her Catholic Institute club mate on hand to swipe home a vital goal from mid-circle.
Evans came within millimetres of doubling the lead from a Watkins crash ball, meaning a tense finale. But the single goal was enough as Ireland withstood a late onslaught, including a corner with 36 seconds to go, to get over the line and three points on the board.
The outcome means a win over Spain on Wednesday (11.30am Irish time, live on RTE2) should put Ireland through to the semi-finals for the first time and guarantee a World Cup ticket.
“Coming into this, we kind of felt it was going to come down to the final pool game,” said midfielder Chloe Watkins.
“The Spanish are the old enemy for us; they have been on a similar journey as ourselves over the years. They are an incredibly good team and it will be a really tough challenge.
“Again, it will be very different today. They are very skillful and it will take a lot of hard work to break them down but I think if we just do our homework and focus, we’ve had good results against them in the past. But it will take a big effort no doubt.”