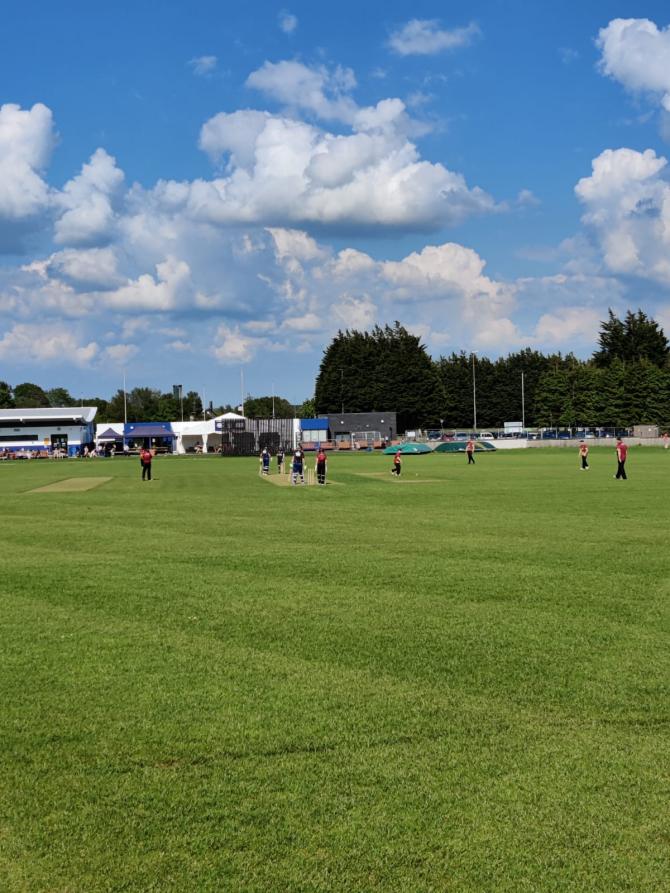 WITH the turmoil of last week’s rain cancelling an away fixture to Donemana, Coleraine were at Sandel Lodge again on Sunday looking to build on the positives that saw them come up just short against Ardmore a fortnight ago.

Coleraine won the toss and elected to bowl first, hoping to take the initiative in the early afternoon heat.

James Bell, as is becoming something of a habit for him, beat the outside edge of the bat on more than one occasion and saw miscued drive go looping through a gully region that had been vacated the ball before in favour of another slip catcher.

In the end, it was Cameron Block who provided the breakthrough with the score on 42. A perfectly pitched delivery beat the batsman and knocked the stump backwards.

A change of bowling at both ends in the seventh over saw the pace taken off the ball with spinner Adam Bell bowling down the hill and captain Mark Smyth taking the ball in hand for the first time this season for some niggling line and length.

Smyth took two wickets in consecutive overs, the first an ill-timed drive to mid-on, brought out a spectacular catch from David Feeney who first parried the ball that was just inches from the ground and then gathered it to dismiss Bready opener McKillop for 23.

Smyth then trapped new batsman McCorkell in front of the stumps for an LBW dismissal. At 46 for 3 Coleraine were looking to be back in the game and the runs were beginning to dry up.

Bready’s number four and five batsmen, however, dug in well and kept the scoreboard ticking and would add another 26 before Bob Millar’s quicker pace produced an LBW in his second over. He then took another in his next over to have Bready at 83 for 5.

Bob was in action again just a short time later as James Bell came on for his second spell. Bready’s number six, Ruthford, was going well on 14 as he drove a ball through the covers, the ball was sweetly struck but Millar, at lighting speed, stuck out his left hand and took a fantastic single hand catch allowing James Bell to pick up the wicket his bowling certainly deserved.

Cameron Block was back into the attack in the 19th over to take his second wicket of the game and to leave Bready with a score of 102 for 7 after 20 overs.

Having scored 130 on the same ground against Ardmore two weeks ago, Coleraine would have been confident of chasing down just over 100.

The new opening pairing of David Feeney and Adam Bell started well and looked calm and composed at the crease for the opening couple of overs.

However, Bready fielded very well and bowled excellent line and length deliveries to stifle the runs and the pressure began to show.

Adam Bell holed out trying to break the shackles and David Feeney followed soon after to an LBW from an excellent delivery from Bready bowler TJ Boyd.

With the score at 20-2, Bob Millar came to the crease and looked in good touch as he got the scoreboard moving again. Unfortunately for Coleraine, the wickets kept tumbling.

Young Jamie Smith was bowled by Boyd for two and then Hamed Rohani was run out trying to take a quick single that just wasn’t there.

The stumps kept getting hit as Ryan Lee Gaile and Davy Moffett were dismissed for single figures.

Bob Millar’s defiant 25 was brought to an end as he tried to play a ball into the leg side but struck his bat on the ground exposing his stumps to a straight ball that went on to take the bails off. At 59 for 8 with 17 overs gone, the game was all but over.

In form youngster Cameron Block hit a few nice shots down the ground for a total of six runs before dismissal and new face Kyle Mclaughlin got an introduction to senior batting that was short-lived but informative as he was the last man out without scoring.

In the end, Bready finished as comfortable winners with Coleraine Thirds all out for 67.

After the match, skipper Mark Smyth praised his team’s work in the field but was not shy about the day’s shortcomings.

“I thought we fielded and bowled well," he said.

"We didn’t give much away and the young lads in the side chased down every ball with enthusiasm and determination.

"But our batting let us down today, and it’s as simple as that. We had too many false starts and just didn’t get going. At least we know what to focus on in this week’s nets sessions!”

The Thirds will travel to New Buildings this Sunday whilst the Second XI will have a doubleheader at home on Saturday and Sunday.

Matches start at 2pm and if the weather and cricket are anything like this week it will certainly be a day to don the suncream and enjoy the show.