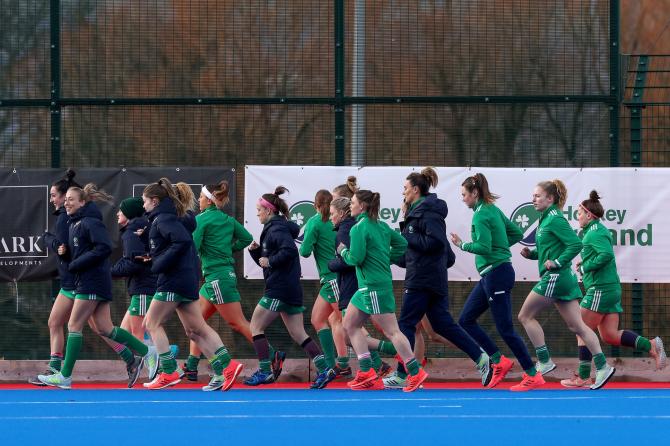 THE Irish Women’s squad will travel to Bisham Abbey, London, tomorrow as part of their preparation for Tokyo Olympic Games this summer.

A 20 strong squad will travel on Thursday April 22 with four matches against Great Britain scheduled to take place between April 22 and May 2.

All of the games are being played behind closed doors and will not be streamed.

Both Hockey Ireland and Great Britain Hockey will share the results on social media at the end of each day.

The matches will all be uncapped.

Notable absences from the squad include Ayeisha McFerran, who remains on duty with Dutch Hoofdklasse club SV Kampong.

Both Megan Frazer and Elena Tice remain at home managing injuries, while Ellen Curran and Caoimhe Purdue are called up to the squad.

Speaking on the trip announcement, Performance Director Adam Grainger said: “We’re very happy to have been able to travel for these matches. Great Britain are obviously a very strong side so this will give the squad more opportunities to test themselves against challenging opposition ahead of an intense summer of international hockey.

"It’s been a challenging process with so many moving parts; the changing restrictions and ensuring we are minimising the risk of COVID to our athletes and their families while also providing them with the best opportunity to perform at the Olympics this summer.

"The team has been excellent in dealing with the challenges the current situation has presented to their programme.”