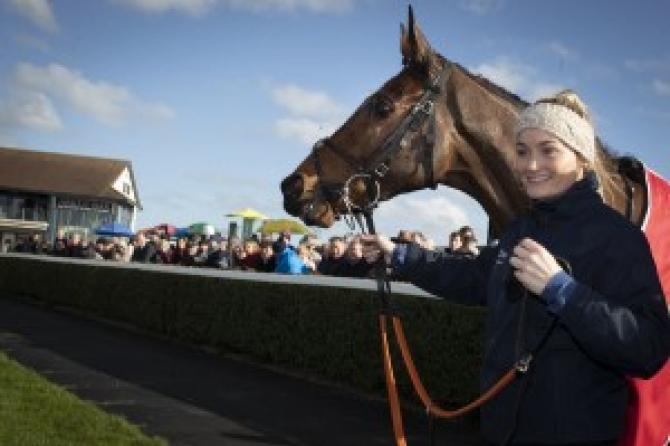 The legendary Tiger Roll and Louise Magee in the winners' enclosure after the 2019 Ladbrokes Ireland Boyne Hurdle.

THE legendary Tiger Roll features among an entry of 12 horses for the Grade 2 Ladbrokes Ireland Boyne Hurdle on a big day’s racing at Navan on Sunday.

The four-time Cheltenham Festival winner and dual Aintree Grand National hero is on the comeback trail after being pulled-up at Cheltenham’s meeting in November.

He is set to line out in the Boyne Hurdle for the third successive year, winning at odds of 25/1 in 2019 and finishing fifth to his own stable companion Cracking Smart 12 months ago.

Trainer Gordon Elliott is bidding to win the race for the fifth year running. He has made three entries, with Tiger Roll entered along with Fury Road and Commander Of Fleet.

Willie Mullins, successful in the race in 2012 with Mourad and with On His Own the following year, has entered Scarpeta while Mouse Morris has his John Mulhern Galmoy Hurdle winner Sams Profile and French Dynamite, runner-up in the Lismullen Hurdle at Navan in November.

Sharing top-billing on Sunday is the Grade 2 Ladbrokes Watch Racing Online For Free Ten Up Novice Chase, a race won by nine different trainers in the last 10 years.

Remembering a mare that won at the highest level for both Elliott and Mullins, the Listed Apple’s Jade Mares Novice Hurdle has attracted an entry of 11 horses. Henry de Bromhead’s Atlantic Fairy, the Stuart Crawford-trained La Chanteuse and Joseph O'Brien’s Global Equity are among those going forward for the inaugural running of the race.

Peter Killeen, Manager of Navan Racecourse, said: “The news that Gordon Elliot’s legendary Tiger Roll is entered to run next Sunday to have another pop at the Ladbrokes Ireland Boyne Hurdle is very good news indeed, even as we continue to deal with no spectators. There really is a great association with Tiger Roll and Navan as he continues to start his annual campaign here.

“It is hard to believe that it’s a year since we saw another of Gordon’s horses Cracking Smart win the Boyne Hurdle with a grandstand full of racegoers and thinking at the time that it might be Tiger Roll’s last run in Ireland. There are a number of other noteworthy entries this year and it’s great to see the Boyne Hurdle living up to its reputation and also that Ladbrokes’ valued and appreciated support in these hard times is being rewarded with a must-see event, even if it is from the sofa.”