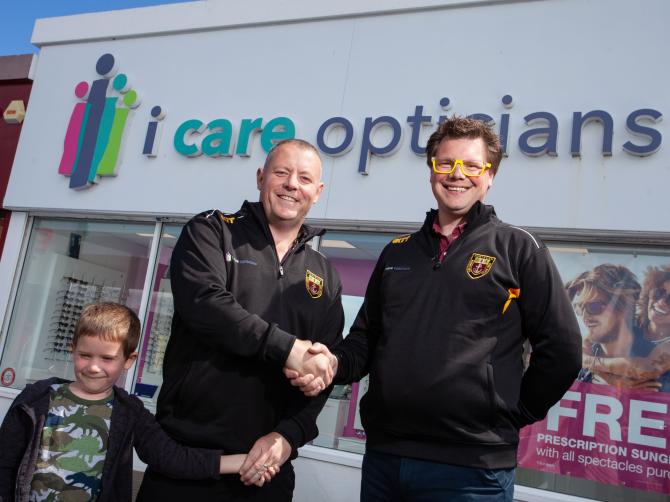 Ian McClure, alongside son Ethan, receives sponsorship from I Care Opticians’ Stephen Vandevyver in Portrush prior to departure for the Commonwealth Games.

TWO local bowlers are within striking distance of Commonwealth Games gold after another successful day for the Northern Ireland team in Birmingham.

Ian McClure, competing in his SIXTH games, is part of the men's fours team which will play India in Saturday's final while Ballymoney's Gary Kelly meets Malaysia's Fairul Izwan Abd Muin in the men's singles semi-finals.

Their successes to date means that Northern Ireland has a guaranteed medal tally of 16 medals, surpassing the previous best in Edinburgh in 1986.

The only question now is what colour will the medals be for our local duo.

The men's fours will be full of confidence going into their final having defeated Wales 18-9 in the semi, a brilliant final five ends securing an historic win after having earlier accounted for Scotland.

Kelly, too, was in fine form at Leamington Spa as he swept aside the challenge of South Africa's Jason Evans 21-12 to set up a last four tie against Malaysia's Fairul Izwan Abd Muin.

You can watch how they fare live on BBC from noon on Saturday.

Best of luck to both men and to all of Northern Ireland's athletes...