Robbie Keane on way to Galgorm 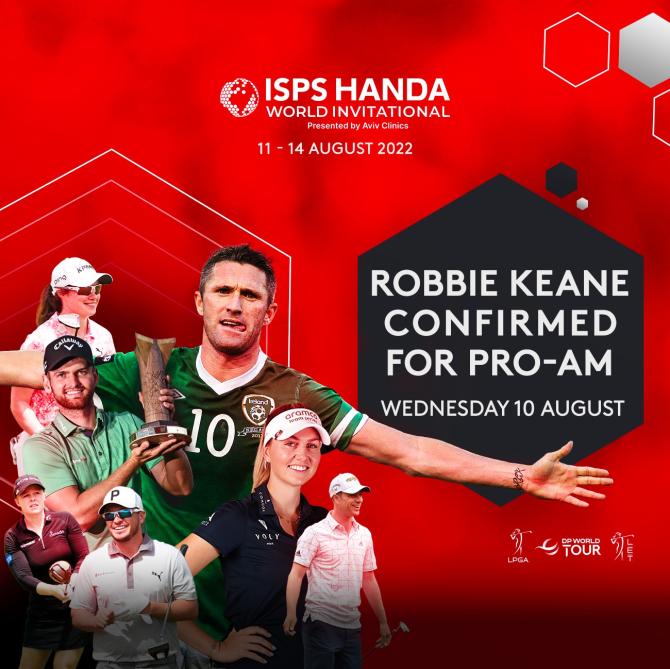 FORMER Ireland International Soccer star Robbie Keane will join his friend Niall Horan in the Pro Am at the ISPS Handa World Invitational presented by AVIV Clinics Pro Am at Galgorm, Co. Antrim next Wednesday, August 10.

“I’m delighted my pal Robbie Keane is joining us at the ISPS Handa World Invitational Pro Am next week at Galgorm," said Niall Horan.

"Robbie and I have been great friends for years so I’m really looking forward to catching up with him next week. We’re playing together on Wednesday and I know Robbie is competitive so I’m sure we’ll have a bit of a laugh on the course.

"It’s great to be back in Northern Ireland for the event and I’m looking forward to what’s shaping up to be a great week. I’d really encourage everyone to come along as it’s always a fun event.”

The Pro Am takes place on the eve of the ISPS Handa World Invitational which brings together some of the best players in the men’s and women’s game, with a DP World Tour tournament and co-sanctioned LPGA Tour and Ladies European Tour event played concurrently over two courses at Galgorm Castle and Massereene from August 11-14.

Also taking part in the tournament is Leona Maguire, Ireland’s first-ever winner on the LPGA Tour, Northern Irishwoman Stephanie Meadow, who won the 2019 edition of this event, 2018 Women’s British Open winner Georgia Hall and Germany’s Olivia Cowen, who earned a place on the LPGA Tour in 2022 through qualifying school.

The tournament will also host the G4D Tour, which brings together the world’s best golfers with a disability. Last year, Modest! Golf player Brendan Lawlor secured an emotional victory at Galgorm – a win which moved him to the top of the World Ranking for Golfers with Disability (WR4GD) for the first time - with Lawlor set to defend his title next month in front of home crowds on Monday August 8 and Tuesday August 9.

DP World Tour winners Guido Migliozzi and Ewen Ferguson will tee it up alongside Daniel Gavins, who will be defending the title he won in fine fashion last year after carding a seven under par final round 65. Italian Migliozzi is a two-time winner on the DP World Tour, while Ferguson earned his first professional victory at the Commercial Bank Qatar Masters earlier this season.

Tickets for the Pro-Am and all four tournament days are available, with a season ticket available for all five days of action at Galgorm Castle and Massereene Golf Clubs.