Rain fails to dampen enthusiasm as SuperCupNI returns after absence 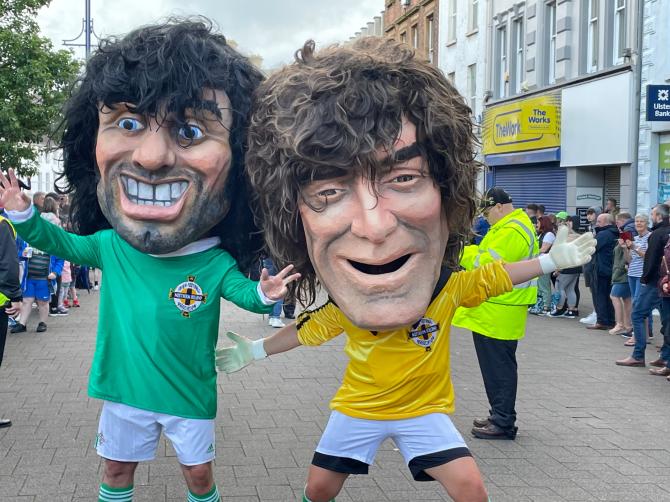 A couple of NI footballing legends attended the StatSports ended the opening of the STAT Sports SuperCupNI in Coleraine on Sunday.

THE threatened rain failed to deter thousands of people from lining the streets of Coleraine on Sunday evening as the STAT Sports SuperCupNI returned after an absence of several years because of Covid-19.

And they afforded visiting teams, from every corner of the globe, the traditional warm welcome as the parade snaked its way from Coleraine Town Hall to the opening ceremony at the Coleraine Showgrounds.

There to perform the official opening was a man who knows what it's like to experience the tournament - two-time winner Keith Gillespie.

The Bangor man was part of the famous Man Utd team of 1991, a team containing the likes of future stars David Beckham, Paul Scholes and Gary Neville, which unsurprisingly lifted the trophy.

Gillespie, voted Player of the Tournament that year, has two winners' medals from his time on the north coast so is well placed to advise those following in his illustrious footsteps this week.

"Just enjoy it, first and foremost," was the former NI international's advice.

"There's obviously going to be some exceptional players here and there's gonna be a lot of scouts watching.

"Just do your best at all times but most of all, enjoy it."

This year's tournament, which has attracted a record number of teams, kicks off on Monday with games taking place all week at a range of locations throughout the province.

Keep up to date with all the latest developments in both The Chronicle newspaper, on line and on social media.