The Raft Race will be back with a splash in September 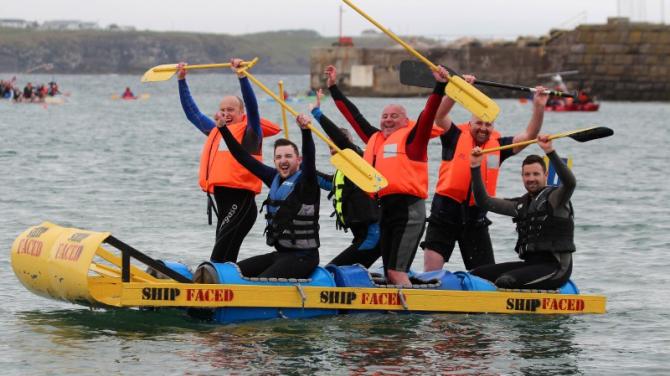 PORTRUSH Raft Race will be ‘back with a splash!’

That was the promise of the organisers behind the popular fundraising weekend event for the RNLI which this year will take place in the first weekend of September instead of the usual May slot.

After a launch in Belfast on on Tuesday, which attracted the television cameras, the official local launch took place last Thursday night in Portrush Yacht Club.

The Mayor of Causeway Coast & Glens, Councillor Ivor Wallace expressed the delight of all those present that the event was ‘back with a splash’ after the two year Covid enforced break.

The local Ukulele Players, ‘Ukes @ The Port’ gave the 150 strong attendance a royal welcome as they arrived and the evening also featured a performance by the Renegade Kings. Both of these acts will also feature during Raft Race Weekend.

Other speakers on the night were Ian Bennington from Studio Two who represented Porter & Co who are this year's headline sponsor, Stephen McConnell who is Chairperson of the Raft Race Weekend Committee and Des Austin who is Coxswain of the Portrush Lifeboat.

Brian Moore acted as compere and he'll also perform this role on both days at the event on Saturday and Sunday, September 3 sand 4.

The importance of events such as the Raft Race Weekend was emphasised by both the Mayor and Des Austin as the funds from the event are donated to the RNLI who, in turn, ring-fence them for the every active Portrush Lifeboats.

Some pertinent facts and figures:

l In any one year the RNLI will mount rescue missions around 8,000 times.

l It costs approximately £180,000,000 annually to maintain the RNLI operation.

l The Portrush Lifeboat is called the William Gordon Burr.

l Portrush Lifeboat is one of the busiest in Britain as, geographically, it has the most ‘lanes’ to cover.

For entry forms and more go to www.portrushraftrace.co.uk