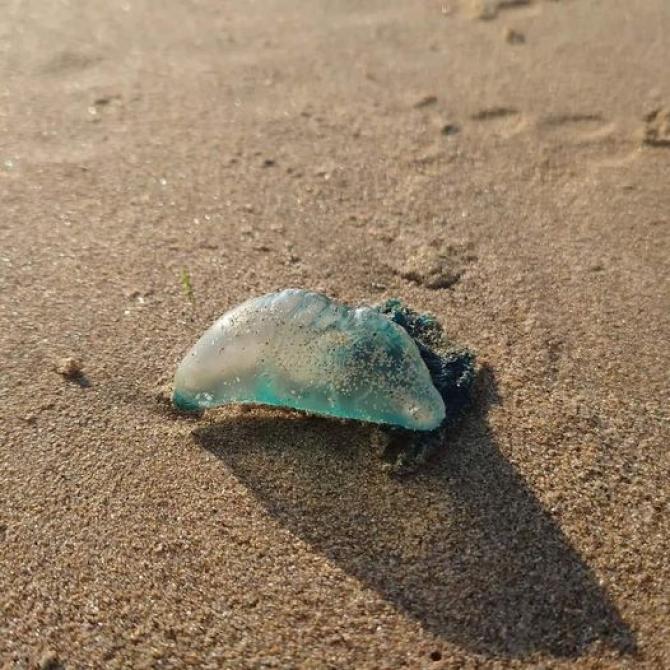 The jellyfish-like creature is capable of inflicting a severe sting that can be fatal in rare cases.

A dead specimen was found washed up on West Strand on June 1.

Publicised on social media by an open water swimming group, its since been authenticated by officials from Stormont's Department of Agriculture Environment and Rural Affairs, (DAERA)

A department spokesperson told the Chronicle: “The sighting of one on West Bay in Portrush on 1st of June was confirmed by Ulster Wildlife and is the first authenticated record for Northern Ireland.”

Asked about the potential danger to bathers, the spokesperson added: “The stinging cells (nematocysts) in the tentacles that trail in the water below float can inflict a very painful sting, raising welts on exposed skin.

“It would be considered to inflict the most painful sting of any “jellyfish” in local waters but fortunately very rarely encountered.”

The spokesperson explained that trailing tentacles can be up to 100 feet long but are easily broken off and fragmented as they are washed up on the shore.

“This can result in swimmers being stung even when there is no man o’ war in evidence,” she said.

“Ropes in the water are often enwrapped with tentacles as the animal is swept past, driven by wind and current.

“These stinging cells can remain active and capable of stinging for days after the man o’ war has washed ashore.

The Portuguese man o’ war, (Physalia physalis) is often mistakenly called a jellyfish, but is in fact a species of siphonophore, a closely related a group of animals.

They are readily identifiable with their bright blue/purple balloon-like float with frilled translucent ‘sail’ and purple tentacles, although their colours can fade when washed up on the shore.

They are named after the 18th Century armed man o’war sailing ships people thought they look like the vessel at full sail and pack a punch.

“The best advice is to avoid contact with them,” said DAERA's spokesperson, “the stings will not penetrate a wet suit but may cling to it.”

If stung advice is to:

- Rinse the affected area with seawater so the water drains away from other areas of exposed skin (not fresh water – that can trigger more stings). For man o’ war stings vinegar has been shown to be effective but at the beach seawater will be more available.

- Remove any remaining tentacle from the skin using tweezers or the edge of a bank card taking care not to rub or spread it over a wider area – and trigger more stings.

- Soak the area in very warm water (as hot as can be tolerated – not boiling) for at least 30 minutes – use hot flannels or towels if you cannot soak it, this helps deactivate the stinging cells and breakdown the venom

If symptoms are serious or if in doubt DAERA's advice is to “seek medical attention.”