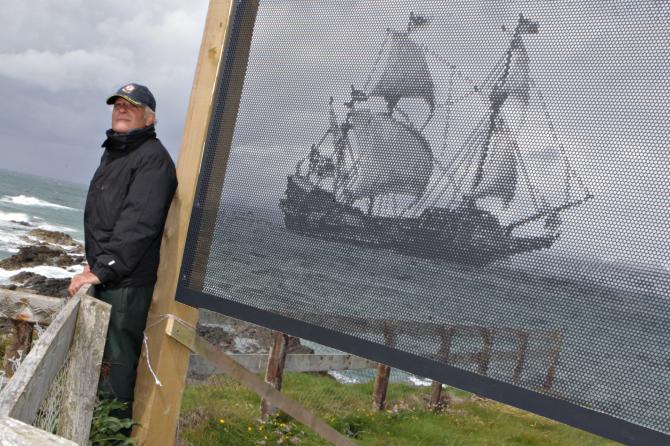 SPAIN’S top diplomat in Northern Ireland says new efforts to promote the Girona's legacy could usher in a new era of tourism between the two countries.

Acting Vice Consul, Jose Lazaro was speaking in Portballintrae on Saturday at the unveiling of a memorial to the wrecked Armada vessel and the estimated 1400 Spaniards who drowned.

The dedication was part of a wider arts festival headlined by the Ulster Orchestra and billed as a Spanish/Irish collaboration aimed at promoting friendship between Armada enthusiasts in both countries.

“There is already a really close connection between the people of Ireland and the people of Spain through the history,” Mr Lazaro told the Chronicle.

“The personalities of Spanish and Irish people are are really close, so we have always felt really really welcome.

“When you travel around the coast you find so many places with connections to Spain and that is something that can be developed and promoted by the agencies and the authorities.

“And if there is going to be a monument here to remind people about where the Girona sank and where all the sailors passed, it’s definitely something that could bring people and attract people here to Portballintrae.”

Among the guests of honour at Saturday's event was Pedro Luis Chinchilla. He is the founding member and leader of ‘La Armada Invencible’ - an association of Spanish history buffs which aims to keep alive the memory of the Armada.

He explained how more and more of his compatriots are eager to learn about the military and human catastrophe that afflicted his homeland five centuries ago.

“There are lot of people who wish to rescue this legacy,” he said.

Many of them have been making an annual pilgrimage to Grange in Co Sligo, to celebrate its links with the Armada.

But Saturday's event marked a formalisation of relationship his countrymen and the community north of the border.

“It's very well known about the ship wreck here, and we feel very lucky to be here,” he said.

Of the 130 Spanish ships that set out in 1588 to invade England, over 20 were wrecked off the North and West coasts of Ireland.The galleass Girona with its compliment of 121 sailors, 186 soldiers, 50 bronze cannons and 224 rowers was one of the biggest.

She survived the perilous voyage around the north of Scotland and had gathered surviving crews of two other shipwrecks and all their accumulated valuables when she was blown by gale force winds towards the north coast.

The power of the 224 rowers could do nothing to keep the ship offshore and she finally struck Lacada Point on October 28th, 1588. It's thought around 1400 lives were lost.

Almost 400 years later, Belgian Robert Sténuit began searching for the wreck from his base in a Portballintrae B&B. And in the summer of 1967 he literally struck gold.

Little was left of the ship's timbers, but a rich haul of treasure - gold and jewelled trinkets, badges of rank, religious charms, tenderly inscribed love-tokens, money chains and nearly 1,200 gold and silver coins - showed where the offspring of Spain's noblest families perished.

Mr Stenuit was invited to attend Saturday's event but he was too frail to travel. Instead he sent a note which was read out to the assembled audience.

“Please transfer to all who will be present my regards and also my greetings,” the famous marine archaeologist wrote.

Another highlight was the unveiling of a sculpture depicting the Girona carved from a fallen graveyard tree that bore the ship's name.

It is said to have sprouted from chestnuts in the pocket of a dead crew member who washed up near Ballygally.