Writer Mary emerging out of the 'chrysalis' with her new collection 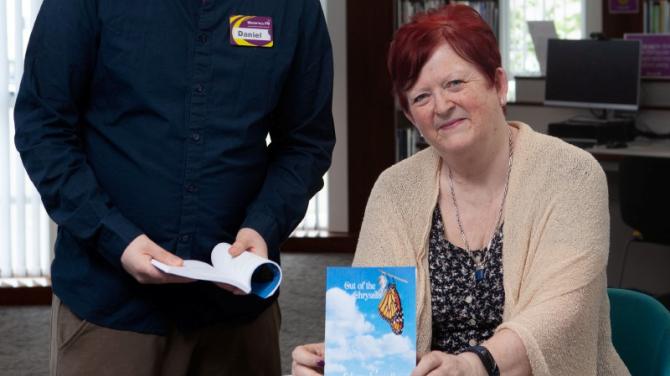 A NORTH Coast based writer has published her second collection of stories.

Coleraine Library was the welcoming venue for the launch of Mary Farrell’s Out of the Chrysalis last Tuesday, May 31st.

Like her first Collection It’s like walking a Tightrope, 2021, both books are published by Impspired Press, based in Lincoln.

These collections contain a varied selection of pieces as Mary challenges herself to experiment with many different techniques and formats in an effort to hone her writing.

She trusts that by constantly striving for improvement, she is beginning to emerge out of the ‘chrysalis’ of the collection’s title.

At the launch, five members of North Coast Writers picked their favourite pieces from the book to read to an enthusiastic audience.

Mary wishes to thank Northern Ireland Libraries, Coleraine Branch, and in particular Branch Manager, Daniel McCurdy, for all the help and support she received in providing such a welcoming background for the event.

Her debut collection of short stories, The Kingdom, will be published in November this year, also by Impspired Press, as well as Springboards, a guide book she is currently writing for Facilitators of Creative Writing Groups around the world.

As part of the groundwork for this book, plans are being discussed with Mr. McCurdy, the Branch Manager, for her to run regular creative writing classes over the winter in Coleraine Library itself.

Mary says, “I look forward very much to working with Coleraine Library on an initiative such as this and being part of the Library’s valuable contribution to the Causeway Coast community.”

Mary has been a Facilitator of the North Coast Writers Creative Writing Group for three years now.

Set up in January 2019 along with Group Leader, Robin Holmes, it met originally in Portstewart, and more recently, with the support of a second Group Leader Geraldine Fleming, has been meeting on Zoom, using links set up by Causeway U3A.

Mary says, “I can't thank the members of North Coast Writers enough for their encouragement, support and advice in helping me to produce this collection, and for their willingness to participate in the group work necessary for the drawing up of Springboards.”

During the last three years, Mary has begun an initiative to encourage interaction between all the writing groups along the North Coast and regularly acts as an auditor at creative writing workshops at the Ulster University Campus in Coleraine.

She is also on the judging panel of the weekly contest run by Reedsy International Publishing Company and is an enthusiastic member of both Portrush Writers Group and This Writing Thing, a creative writing group based in the North-West of Ireland.

She has had various prose and poetry pieces published in local and international publications and Anthologies.

l Both of her collections are now for sale in No 6 Queen Street, Coleraine, in The Bookshop, Society Street, Coleraine and at The Bookcase at 12 Dunluce Avenue, Portrush. They can also be purchased online from Amazon.