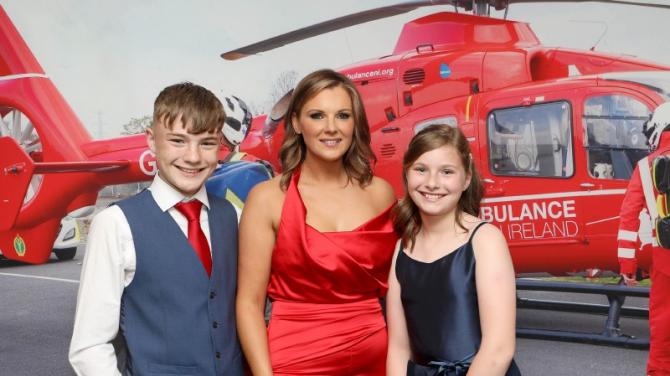 Caroline Smyth, with her son Harry and daughter Ellie pictured during Ellie’s Summer Ball in aid of Air Ambulance NI held at the Royal Court. WK23-111TM

AN inspirational Garvagh family has helped to raise over £12,000 for Air Ambulance NI.

The event, which took place at Portrush’s Royal Court Hotel, was in held in memory of Ellie’s father, Peter Smyth, who died three years ago.

Taking place during what would have been Peter’s 50th birthday year, 170 guests joined the Smyth family at the event, contributing to the overall fundraising sum.

Since Peter’s passing back in 2019, the Smyth family committed to raising funds for Air Ambulance NI and have raised a collective £20,000 over the past three years.

Ellie’s Red Tie Ball was supported by local businesses, who pledged prizes to the charity auction, which was overseen by the experts at Wilson’s Auctions.

Peter’s brother, Alaistair Smyth, was MC and the Goodfellas band played at the event.

Reflecting on the evening, Caroline Smyth adds: “It’s thanks to the incredible support of our family, friends and local businesses that we have been able to raise over £12,000 at Ellie’s Red Tie Ball.

“Both Ellie and Harry are delighted to further donate to Air Ambulance who have helped us so much as a family over the past three years and we would like to extend a huge thank you to everyone who contributed to the success of the evening.”

Caroline, Harry and Ellie are ambassadors for Air Ambulance NI and continue to volunteer at local events and fundraisers.

In 2019, Harry raised £14,000 via ‘Harry’s Run’ – a 12km charity run for Air Ambulance - and Harry was subsquently nominated for an Outstanding Young Person’s Award.

Sister, Ellie, has just been recognised at the Local Women Awards, being shortlisted as Inspirational Young Person.