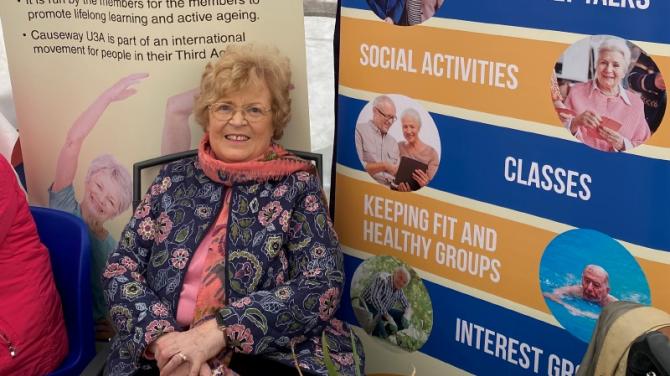 THE Chair of Causeway U3A group has spoken of her amazement at learning she'd been awarded a British Empire Medal.

Dr Venie Martin was named on the Queen's Jubilee Honours List last week for services to the older people in Northern Ireland.

“I was amazed to open my Facebook page after breakfast, to see posts stating that I had won an award in the Queens Platinum Jubilee honours list,” she told the Chronicle.

“It was the last thing on my mind that lovely summer morning. My husband Eric and I rushed to locate the official listing to confirm that it was true.”

Venie moved to Coleraine in 2015 having worked in Waterford Institute of Technology for more than 40 years. Her family is from the north west and sister Shirley still lives locally

“We love the area and thought it would be a nice change,” she said. “We knew nobody other than my sister, so we decided to join Causeway U3A to meet other retired people.”

The Causeway group now has 1200 members and provides a range of social and learning opportunities for the retired and semi-retired community of the North Coast area.

A career in higher and adult education meant Venie was quickly involved in its administration and she became Chair in 2018.

“We saw two main opportunities – Zoom for relaying meetings and events and BBO – a platform for playing Bridge online,” she said.

“A member, Brendan Mullan, who had not been involved previously in committee and who had skills in using zoom, came forward as a volunteer. With his technical skills and my training and facilitation skills we got a few group leaders and members to buy in.

“Other groups saw their success and it snowballed until more than 20 activity groups were meeting regularly on Zoom and enjoying it a lot.”

Brendan and Venie were invited to make videos for the use of other U3As to help them follow their lead.

Despite the recognition, Venie says she's still reeling from the Honours Award.

“I find it hard to believe that I am getting an award like this for doing things I enjoyed so much and which I found so rewarding,” she said.

“There is life after retirement and u3a is a great organisation for ensuring everyone has the opportunity to enjoy their third age – even during lockdowns!”