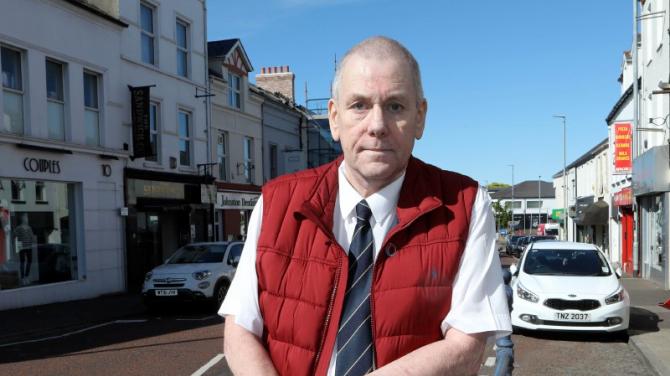 A MAN, caught up in the Railway Road bomb 49 years ago, has described his relief at seeing a memorial installed as his own life draws rapidly to an end.

David Gilmour, who is living with terminal cancer, witnessed the horrific aftermath as a ten-year-old on a shopping trip with his parents.

Six people were killed when an IRA car bomb detonated on June 12, 1973. Among 39 others seriously hurt was David's father, blown the entire length of the shop he'd entered moments earlier.

He has been campaigning tirelessly for a memorial ever since and on Wednesday he finally saw a granite plaque unveiled right next to the blast site.

“I'm so relieved to finally see the bombing has been marked,” he told the Chronicle.

“At least there is now something there that represents history.”

Next year a larger memorial will be erected in the Diamond to coincide with the bombing's 50th anniversary. A much grander ceremony than Wednesday's low key affair is planned

But it's an event David knows he will not be around to witness.

“I'm disappointed I'm not going to see the full memorial but I'm happy knowing that I played a part in getting it sorted out after 49 years,” he said.

And despite his ill-health, there was no way he wasn't making the short trip from Rathene Fold in Union Street to see the plaque installed.

“I'd have been there in Railway Road on Wednesday, even if it killed me,” he said.

“My grandmother used to call me thran - and sometimes being thran is not a bad thing!”

David has been told he has only a matter of months to live. He was diagnosed with lung cancer and the disease has since spread to his liver.

“They are talking about me seeing July and that's about the height of it,” he said.

But the is admirably stoic about his fate and content with all he's experienced and achieved.

“Looking back I got my degree, I got a good job. I saw a lot of places and met a lot of fantastic people.

“I look back and think I've done alright for a wee lad from Portstewart.”

David was accompanying his father on the day of the bomb while he ran errands in the town centre.

Just before three o'clock he and his Mum were waiting in the car on Railway Road while Dad popped into a photographer's shop across the road.

None of them realised a device in an empty vehicle, parked yards away across the street, was primed and set to detonate at 2.50pm.

Miraculously David and his mother escaped virtually without a scratch But, it was a very near miss.

And the human carnage he witnessed has never left him.

All the of the dead that day were aged between 60 and 76.

The inlaid 60cm circular granite plaque outside No. 3 Railway Road reads: “On the 12th June 1973 a no warning IRA car bomb exploded on this spot resulting in the death of six innocent people, wounding and impacting the lives of countless more”