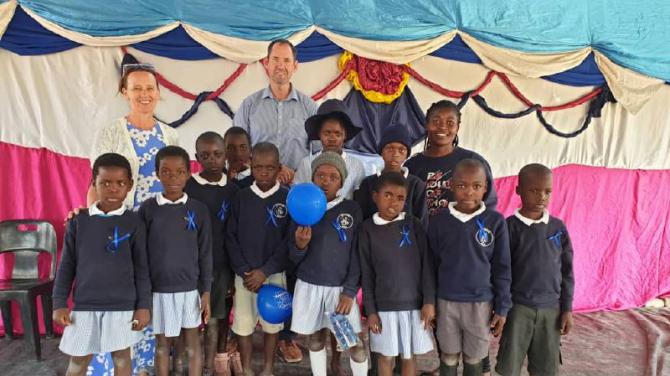 Pauline and Paul pictured with the children during their visit to the school.

A CARING Coleraine couple have opened a school in Zimbabwe after being touched by the plight of pupils there who received no schooling during the long lockdown.

Pauline and Paul McCullough, who lived in Zimbabwe for ten years, had hoped to help educate 100 children through their friends there.

However, they were overwhelmed last year when 23,000 children from Zimbabwe and South African signed up for their Maths, English and Lifeskills worksheets in just a fortnight.

Pauline, who is originally from Limavady and a former Joint Head Girl at the town's High School, told the Chronicle: “We had sourced workbooks and Paul set up a website that could deliver daily worksheets to children.

“We hadn’t intended to start a school in Zimbabwe, but that is what we have ended up with.

“The children arrive early, eager to learn and be a part of something. We have three small wooden huts, a large concrete sheltered area and the promise of land to start building.

“Our intention had been to start slowly. A few children in each grade, guided through the daily lessons by a facilitator.

“But we had grossly underestimated the number of children not in school who were so desperate to learn.

“In February we registered 20 children with the Zimbabwe Ministry of Education and started a small school.”

The mum-of-two recalled: “When we visited the school in May we noticed another 30 children were arriving in the afternoon, hoping to have a small, short lesson in reading, writing and maths.

“They arrived two hours early and sat waiting patiently for the teacher to finish with the morning session.

“Seeing how keen they were and realising they were not attending any school, we made the decision to enrol them also.

“Another child arrived the next day, got down onto his knees and begged us to let him attend. How could we say no? We now had 51. This pattern repeated until we had 55 and had to draw a line. We simply could not manage any more.

“One of the biggest challenges we face is illiteracy. The older children cannot read or write. They really are struggling.

“A highlight of our trip was giving the children school uniforms. They were so excited. Most of them had never owned a uniform. It felt like Christmas morning.

“S & T Moore in Coleraine kindly donated some uniforms so we now have children in Zimbabwe wearing uniforms made locally.

“There is so much need, so much to do it can feel overwhelming. We know that this is a drop in the ocean of need.

“But we have started and, for 55 children, we hope we can make a difference and give them hope. At the very least, help them to learn how to read and write.

“We are very thankful for modern day technology that allows us to have daily contact with the teachers, even though we are living and working in Coleraine.

“We plan to visit again later in the year to take out some teaching resources and reading books.”