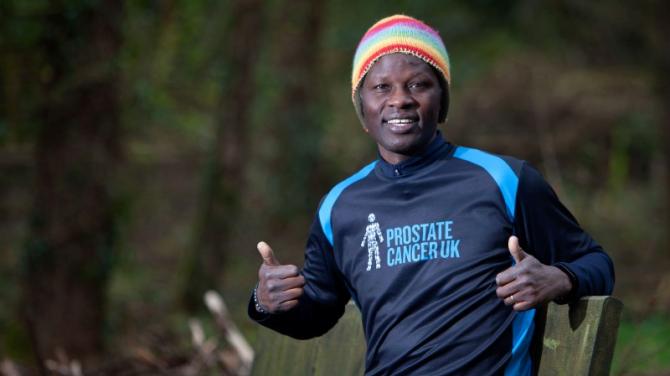 A BIG-HEARTED Coleraine father-of-two ran 136 miles in memory of his own father who died just days after being diagnosed with advanced prostate cancer.

Special Needs support worker Maurice Omollo, who is originally from Kisumu in western Kenya where his father Tom Omollo passed away in April 2020, raised £1,000 for Prostate Cancer UK.

Earlier Maurice, 49, told The Chronicle: “This was an unexpected diagnosis and the speed at which Dad become very unwell and died was a terrible shock to us all.

“Dad had never mentioned any unusual signs or symptoms to us, perhaps putting anything out of the ordinary down to age, other on-going medical conditions or simply just that he was a quiet and private man.

“As the first Covid lockdown was in place when he was diagnosed and died a short time later, I was unable to travel home to be with my parents which was heartbreaking.”

Last month in memory of his father, and to mark what would have been his 78th year, Maurice set himself the challenge to run 78 miles to raise vital funds for Prostate Cancer UK. His target was £780.

However, he ran 136 miles, including two half marathons, and raised £1000 which will be increased through Gift Aid to honour his father's memory and support other men and their families facing a diagnosis of Prostate Cancer.

He and his wife Fiona said: “We would like to thank friends, family and neighbours who so generously donated to the April marathon effort for Prostate Cancer UK.”

This summer Maurice is planning his first visit home to Kenya since his dad's death, to see his mum and wider family and also to take awareness raising prostate cancer literature to share in the local community there.

The facts and figures from Prostate Cancer UK are stark.

One in eight men are affected by prostate cancer in the UK.

For men over 50, black men or men whose father or brother had the disease, the risk is even higher.

Most men with early prostate cancer don’t have any signs or symptoms.

But there are some things that may mean you're more likely to get prostate cancer.

You might hear these described as prostate cancer risk factors.

Further information is available from https://prostatecanceruk.org