Poots gets a taster of what’s on show at Balmoral 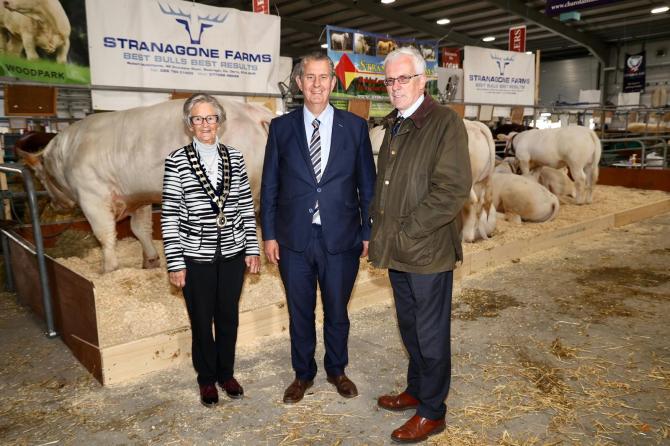 Agriculture Minister Edwin Poots pictured with RUAS President Christine Adams and Deputy President John Henning at the Balmoral Show site on the eve of the event opening to the public.

Agriculture Minister Edwin Poots got a taster of what’s on at the Balmoral Show when he viewed some of the award-winning livestock and exhibits ahead of tomorrow’s big opening.

He was shown around the site by recently appointed Royal Ulster Agricultural Society (RUAS) President Christine Adams and Deputy President John Henning on the eve of the four-day event, which runs from Wednesday 11 May to Saturday 14 May 2022 at Balmoral Park, Lisburn

“The Balmoral Show is the highlight of the year for many of us in the agri-food sector so I’m delighted to get a sneak peek at what is on offer in this its 153rd year,” said Minister Poots.

“And after tonight’s tour I’ve no doubt people will not be disappointed at what this fantastic event offers in terms of our world-class produce, award-winning livestock and family entertainment and activities.

“A huge thank you and well done must go to the RUAS for their hard work in delivering the show with its hundreds of traders, extensive shopping village, food stands and exciting attractions, including a polo exhibition match and a quad bike stunt show,” he added.

RUAS President Christine Adams said this year’s show would also be marking the Queen's Platinum Jubilee with a number of special activities as well as celebrating the 90th anniversary of the Women’s Institute of Northern Ireland.

“Last year we ran the event in September, however we are thrilled to be returning to our usual May date, kicking off the showing season here in Northern Ireland. There is much to see and do at the show, which promises to be a fun-filled day out.”

You can find out what is on each day and book your tickets in advance at www.balmoralshow.co.uk.