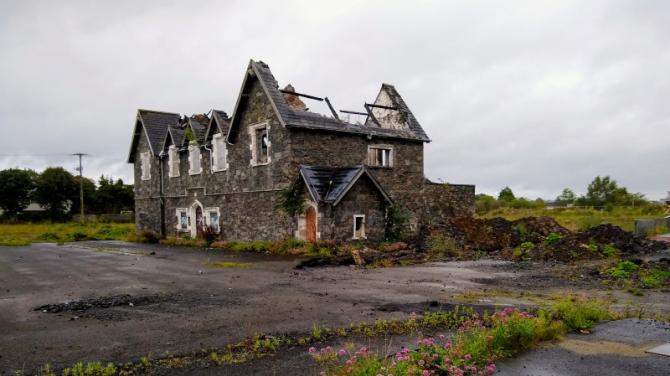 PLANNING permission has been granted for the conversion of Coleraine's historic workhouse building into three dwellings.

A similar proposal was approved in 2005 and the listed building's Mountsandel Road site is also subject of planning approval for a wider development of 55 houses.

According to the planners’ latest report the updated scheme for the workhouse premises differs little from earlier proposals.

“The building will remain mostly unaltered externally,” the report states.

“Features of the archaeological and built heritage, and landscape features are identified and, where appropriate, protected and integrated in a suitable manner into the overall design and layout of the development.

“This proposal will ensure the sympathetic restoration and upkeep of the listed building.”

The property has been vacant since 2001 and was badly damaged by fire in 2017.

The original workhouse was designed by George Wilkinson in 1843 to cater for 700 inmates.

The style of workhouse buildings were supposed to be the cheap, durable and austere with ‘all mere decoration being studiously ‘excluded.'

Wilkinson, however favoured the fashionable Tudor style (intended to evoke notions 15th and 16th century almshouses), ensuring the buildings were not purely functional

Last year the premises featured in a Stormont-commissioned report on mother and baby homes.

The authors touched only very briefly on ‘welfare hostels’ in Belfast and Coleraine which were the new name given to workhouse facilities in the early 1900s.

Newspaper archives suggest Coleraine's workhouse building continued operating as one of these hostels until at least the 1950s.

By then, most of the site had been occupied by Coleraine Hospital.

The property was vacated and sold to developers after the hospital moved to its current home on Newbridge Road in 2001.

Archaeological studies required of the site before work can begin uncovered remains of adjoining workhouse yard and garden.

A single fragment of wall and well associated with the fever hospital was also excavated.