Harbour with a history 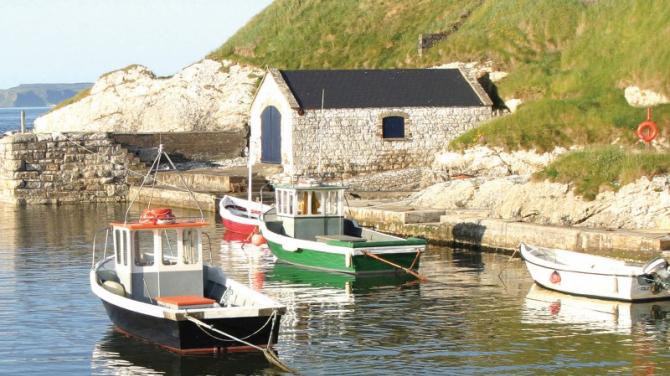 IT may be pretty and attract thousands of tourists every summer but Ballintoy's 150-year-old harbour is not quite worthy of listed-building status.

That's the verdict of report compiled by Stormont heritage officials.

“The Department has considered the heritage value of the above building and concluded that though of some interest, it is not of the sufficient interest required for statutory protection as a listed building,” stated a letter derived to Causeway Coast and Glens council planners last week.

The accompanying report, does however go on to describe in fascinating detail the built fabric, setting and historic and industrial context of the harbour.

Because, perhaps surprisingly, it was not local fishermen who drove its development.

The first serious attempt to construct a harbour at Ballintoy was in the 1750s when Mr Alexander Stewart successfully applied to the Irish Parliament for grants to develop coal mining in this neighbourhood.

Unfortunately, the records suggest Mr Stewart's quay had washed away by 1830s.

Then in October 1860, James Francis McKennan (also spelt McKennon) acquired the foreshore from the Crown Estate for five guineas.

On it he proposed to build what became the present inner harbour.

Earlier that year he had completed a pair of lime kilns that remain standing and a tramway to bring rock and burnt lime from an adjoining limestone quarry out to a small timber jetty at the north end of what is now the outer harbour.

McKennan appears to have gone into partnership with Mr John Herdman as both men are cited in subsequent references to the quarry.

The purpose of the harbour was to create a safer anchorage for the loading of boats to export his quarry's products.

“A small harbour has been commenced for the speedier exportation of the limestone and which, if completed in spite of its natural enemies - the raging sea beating that fearful coast and the shifting sands which beset it - will be of very general benefit to that part of the country,” reported the Chronicle that year.

By 1873 the harbour was described as “a new and neatly constructed landing place” where vessels of up to 150 tons could operate for ten months of the year.

Boats of this size were capable of crossing to Scotland and further afield with heavy cargoes of stone.

Whereas the traditional local fishing boat - the Drontheim - could be hauled up the shore, these larger vessels required sheltered mooring for the loading of quarried rock and barrels of burnt lime.

By 1879 Glasgow-based Eglinton Chemical Company had acquired the lease of the limeworks.

The new owners spent £10,500 filling a gap in the reef at the north end of what is now the outer harbour with large stone blocks to improve the approach to and from the harbour.

In an effort to stamp its authority on the operation, the company also placed a lockable timber boom across the entrance in 1880.

This blockage hindered the fishermen whom the new owners now wished to charge for the harbour's use as a contribution towards its upkeep.

Following a complaint to the Board of Trade and the Fisheries Board, the company removed the boom in January 1881.

At the same time, however, they blocked the public road to prevent the fishermen carting away their catches.

“Whether and when this dispute was ever resolved must await future research,” states the report.

Whatever happened, by the early 1900s the harbour was being used mainly by fishermen.

But by then the harbour had fallen into poor repair.

Fortunately, a descendent of Mr Herdman, whose family had retained ownership, agreed to sell it to the Board.

Transfer was subsequently arranged to the County Council permitting the award a grant of £1,533 from the Department of Agriculture & Technical Instruction towards the £2,300 estimated cost of its improvements

But even by then another industry was staking a claim on the harbour.

The combination of a sheltered sandy beach and stunning scenery had made the harbour a magnet for day-trippers by the mid 1900s.

From 1936, visitors could avail of a tea room operated by the Misses Esma White and Vera Taylor.

A 1939 edition of the Belfast Telegraph described the harbour as “an Antrim Coast beauty spot.”

The last major development scheme was initiated in the 1970s by Moyle District Council to refurbish the harbour, not for industry or fishing, but for tourism.

In recent years the harbour has become very popular with fans of HBO's ‘Game of Thrones’, some episodes of which were filmed here.

While individual elements of the harbour complex are listed – the boathouse, former coastguard station and lime kilns - the report concludes by suggesting Ballintoy harbour is well enough protected by its existing ‘scheduling’ than listing.

“The site is a good example of a mid-19th century industrial harbour,” it states.

“It makes clever use of its setting in an existing natural inlet, with its narrow entrance to give added protection from the sea.

“Its various structural additions illustrate its changing primary function since inception - industry in the 1860s, fishing in the 1910s, and tourism in the 1970s.”