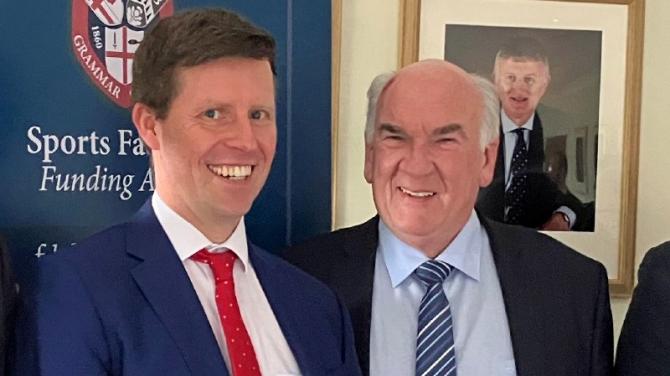 AN Olympic rower has insisted his career depended on access to facilities provided by his Coleraine school.

Richard Archibald competed in 2004 and 2008 but learned to row on the River Bann while a pupil at Coleraine Academical Institution.

He was back in school earlier this month to throw his weight behind an appeal to plug a funding gap in its multi-million pound redevelopment.

CAI merged with Coleraine High School in 2015 and the revamp plan aims to unite pupils for the first time on a single campus at Castlerock Road.

But while the Department of Education is ploughing in “a significant sum” it leaves governors £1m short.

At risk is the development of facilities for extra curricular activities - mainly sports.

Upgrades and alterations are required on facilities that were designed solely for boys.

At present, girls have to leave school to play hockey at Rugby Avenue on the other side of Coleraine.

Last Friday Richard Archibald told guests at a fundraising lunch he saw the issue from the perspective of sports administrator, a parent and a newly installed member of the board.

But crucially, he also saw it from the point of view of a former pupil who'd competed at two Olympic Games because of facilities he'd been able to access at school – even if he hadn't initially been the most enthusiastic of sportsman.

“It's ironic that I am standing talking here today because when I was at Coleraine Inst I did my best to avoid sport,” he said

He went on to explain how it was only when he reached fifth year that he was convinced by friends to give rowing a try.

“And I loved it, right from the first time I got into a boat,” he said.

“We are from a small town and the odds of this were just astronomical. So how did it come about,” he asked. “I put it down to two things - there were coaches and there were facilities.

“In rowing the facility is the river and the River Bann is a pretty unforgiving stretch of water.

“But you can't get on the river without steps and you need a boat house to store boats If you don't have a boathouse and steps you can't access the river.”

The point was, said Richard Archibald, potential lifelong passions may fail to develop if students are hampered by inadequate facilities.

“If you don't have acres of playing fields then you can't have multiple teams across all year groups training and playing matches.

“If you don't have a pavilion that is safe and fit for purpose then you can't access the athletics facilities.

“And if you don't have a hockey pitch you spend time and money transferring coaches and athletes in buses to some other pitch elsewhere.

“You lose home advantage and you put up barriers. People are spending their time doing that than actually training.”

He concluded: “If we put up barriers to any of our sports, there'll be some people who are really determined to do it and they'll do it anyway.

“But there will also be people who are not that interested at the outset and the options that they are given will determine how they take that forward for the rest of their lives.”

Also planned is an extension of the technology block, refurbishment of existing music suite, art department and media studio.

Traffic management measures aimed ease congestion outside the school gates on Castlerock Road will include car parking and bus pick up and drop off area.

For information on how to donate or take part in fundraising activities visit www.colerainegrammar.com/sports-appeal