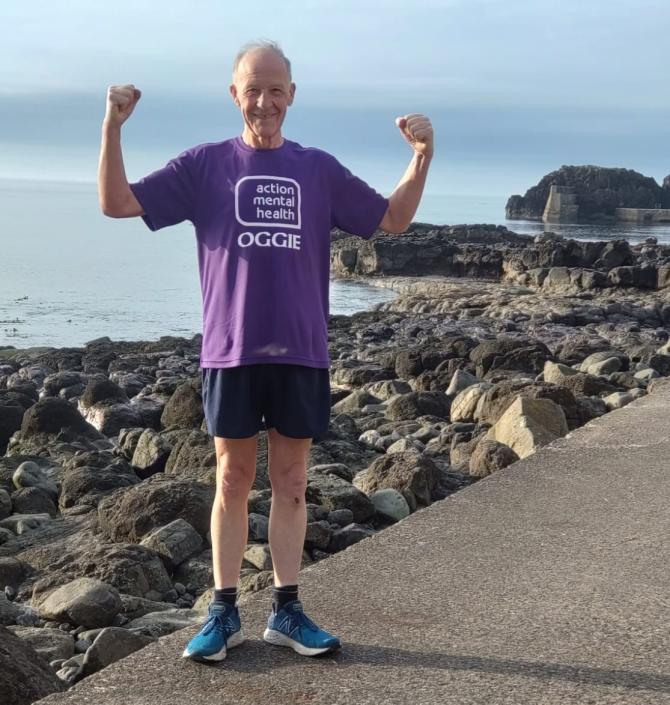 A PORTSTEWART man is celebrating his 65th birthday by setting himself the mammoth challenge of running 600 marathons in 600 weeks!
Eugene Winters – known as Oggie – will commence his amazing feat of endurance with the Belfast Marathon after turning a milestone 65 on May 1st this year.
The loyal supporter of Action Mental Health has already run 300 marathons in 300 weeks, when he was 55, finishing that challenge ahead of his deadline, at 270 weeks.
Some of Oggie’s highlights include running 85 marathons in 2014, 61 in 2015 and a massive 95 in 2016.
The remarkable runner has completed all the ‘Marathon Majors’ – the London, Boston, New York, Chicago, Berlin and Tokyo marathons.
He twice ran 10 marathons in 10 days and also took part in the Hell of the Hill Endurance event which involves running five of the toughest marathons in the UK, in five days.
He’s also been a regular ‘back to back’, ‘treble’ and ‘quad’ runner, meaning running marathons two, three & four days in a row. In 2016 he successfully ran the Victoria Park endurance event in Belfast, running 100 miles in 24 hours.
Eugene is a member of several elite marathon clubs around the world including the Marathon Globetrotters, Marathon Club Ireland, the 100 Marathon Club, UK and the Super Marathon Club, Italy. His best time was the Newry marathon, which he finished in an impressive three hours 37 minutes.
Describing his achievement Oggie said: “It was very tough going at times and I struggled to complete some of the marathons. I ran through injury at a few events and I had to rely on my own mental strength and toughness to get me through.
“I hope that my efforts will maybe inspire other people to go out and do something active. I firmly believe exercising and keeping active can help not just our physical health but our mental health too.
“When I had completed the 300 marathons in 270 weeks, beating my own challenge of 300 weeks I thought what better way to celebrate than to donate some money to Action Mental Health, to help support the vital work they do across Northern Ireland.”
Jonathan Smyth, Head of Communications & Fundraising, Action Mental Health said: “Oggie got in touch with us again to let us know about his new personal challenge and we are absolutely thrilled to have his support and generosity once again.
“Oggie has pledged to donate £1,000 to support our vital mental health services, when he completes his challenge.
“We know that running and all physical activity is a great way of supporting your mental health, so we are particularly delighted to be the beneficiary of this amazing challenge and wish Oggie well.”