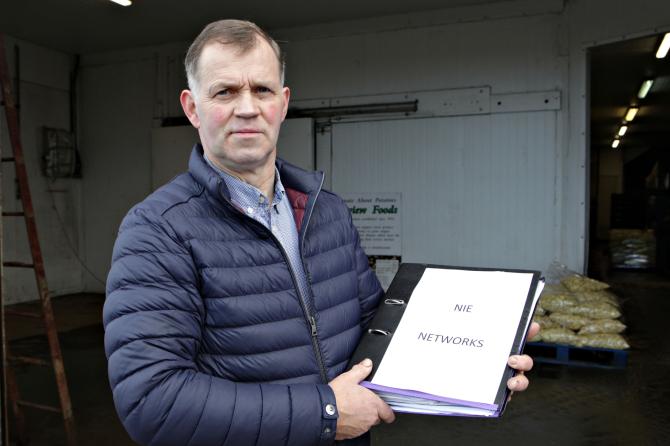 Raymond Todd with a folder containing correspondences between himself and NIE. WK10KC12BM

A BUSINESS expansion worth millions of pounds to the Ballycastle area is being held up because of indecision by the Utility Regulator, it has been claimed.
Glenview Foods owner, Raymond Todd, has told The Chronicle the installation of an anaerobic digester on his Moyarget Road premises would give north Antrim an immediate uplift of £1.8m in terms of spend associated with the facility’s construction. To date, the project has cost £200,000.
Once in place and fully operational, the digester would allow Glenview Foods to ramp up potato processing and achieve carbon neutral status almost overnight.
10 new posts would be created, Mr Todd confirmed, and local potato farmers would also benefit because he could purchase larger quantities of their produce.
“This is a minefield of opportunity, there is so much potential with the idea,” said Mr Todd. “It is a £2m investment overall and so far we have spent in and around £200,000.
“The problem I have at the minute is I can’t draw down any more money from my funder until I get an answer from the Utility Regulator, until they rule on verification.
“It is killing major growth in the business I am in and it is preventing other businesses from cashing in as well,” he added.
“I would be able to take an additional 5,000 tonne of potatoes from farmers every year and that alone would be worth £1m to the area.
“There are so many advantages to having this and the money would flow into so many different businesses - there is a whole secondary supply service there, from fertiliser, spray and diesel suppliers to different packaging manufacturers.
“The project has already been delayed by four years; had it gone live in 2017 when it should have then the business would have been net zero, we would have a fleet of electric vans and we would be sending electricity to the grid as well.
“We are so close to getting it over the line, we need an answer. Why I haven’t got an answer no one can tell me.”
Anaerobic digestion is an alternative way of composting food waste, such as potatoes, to produce renewable energy and avoid harmful carbon emissions.
The sticking point with the Glenview Foods plan centres around long-running certification issues.
Mr Todd believes there are “anomalies and failures” in the system and due to this the Utility regulator did not engage with NIE “in a correct and timely manner” which led to the Office of Gas and Electricity Markets (Ofgem) being unable to grant accreditation in the time allowed.
TUV leader Jim Allister and DUP North Antrim MLA Paul Frew both support the project, and have raised it at Stormont.
In the Assembly last month, Mr Allister claimed the stumbling block around certification followed errors made by representatives at Northern Ireland Electricity.
“They messed up in its delineation of what the project was about,” he told the chamber.
“As a consequence, Glenview Foods got into difficulties by failing to get authorisation from Ofgem.
“The Utility Regulator, which should oversee how Northern Ireland Electricity Networks dealt with the issue, was therefore approached.
“On 1 October, Paul Frew and I, as two local MLAs, met the Utility Regulator about the case.
“Here we are, almost at 1 March, and we have not even had a reply to correspondence, which I have constantly sent it, asking for a response to the points raised on 1 October.
“The Utility Regulator is a body that, frankly, is accountable to no one, and yet a business in Ballycastle is crying out for answers as to why it did not oversee, and what it has done about the issues with, NIE Networks,” he added.
After raising the points made by Mr Todd and Mr Allister, the Utility Regulator confirmed it expected to provide an up-date in the next few weeks.
A spokesperson said: “The Utility Regulator is aware of the remarks made by both Mr Allister and Mr Todd. We can confirm that there has been extensive engagement with NIE Networks, Ofgem and Glenview Foods over a considerable period of time in regard to the matter in question, with a view to ensuring that all of the issues raised have been properly considered.
“We will very soon be in a position to formally respond to the correspondence Mr Allister has referred to.”
NIE Networks, meanwhile, confirmed its representatives had met with Mr Allister in early 2021 regarding the project and the requirements involved.
“NIE Networks always work to provide customers with the best possible outcome for their connection requirements and we engaged with Ofgem - who is responsible for accreditation - at that time to provide all the information they had requested in relation to this connection,” said a NIE spokesperson.