A river runs through it... 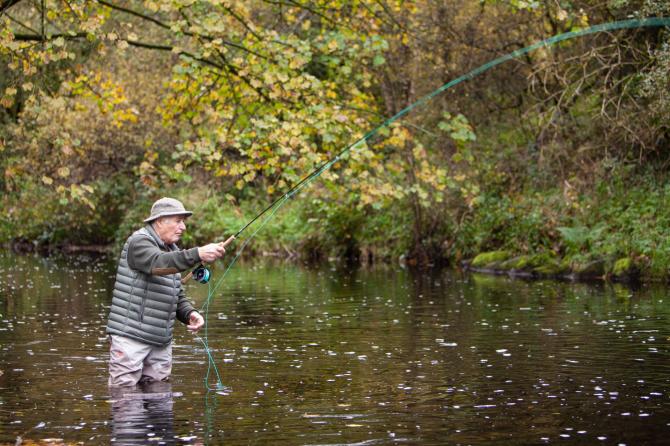 Stanley McCart indulging his passion for angling on the River Agivey.

ANYONE who has visited the Coleraine Showgrounds recently can’t failed to have been impressed by the improvements that have been carried out there.
Apart from the pitch, the old ground now boasts splendid new changing rooms and tunnel area - with plenty more to come.
The work has drawn plenty of praise, a lot going, rightly, in the direction of Stanley McCart, the retired builder who has carried out most of the renovations himself.
Ironically, the 77-year-old doesn’t consider himself a football fan, he’s more an angler, more of which later, but found himself doing the work at Coleraine FC through family connections.
Club director Richard McFetridge is a son-in-law so when officials were looking around for someone with building experience to turn to Stanley’s name was put forward.
And he’s been hard at work ever since.
“I had my own business - SMC Construction - but I’m retired about eight or nine years now,” says Stanley.
“I would still do the odd bit of work here and there and was doing a job at the Loughan when Colin McKendry approached me saying he had a job for me.
“I didn’t know anything about it but I said yes and I’ve been working away at it for a couple of months now,” he adds.
The results are very impressive - underfloor heating and built in overhead speakers in the home changing room for example - particularly so as Stanley has carried out much of the work himself.
But as anyone knows the Garvagh man can testify, when he commits to something he does so 100 per cent.
Take his lifelong love affair with angling: starting, as he recalls ‘at no age,’ he went on to represent Ireland 29 times, travelling the world and winning countless titles along the way.
“I was born beside a river near Finvoy outside Ballymoney and that’s how I got started, I was probably no more than seven or eight,” recalls Stanley.
“There was an old gentleman, Bertie Cuddy, a great angler, and he took me to the Ballymoney Burn to show me how to fish for trout. That started me dry fly fishing and I couldn’t get enough of it.
“Bertie taught me all the tricks of the trade, how to to flies, and I then started salmon fishing on the Agivey at Aghadowey.”
And he never looked back.
He represented his country for the first time in 1982 at Lough Corrib and went on to captain Ireland in 1986.
His first international came at Chew Valley in England where he finished ‘Top Rod,’ an unforgettable experience for the man from Garvagh.
He went on to win the Ulster Championship four times, the Inter Provincials three times and claimed four gold medals with his country in the Home Nations.
In between, he still found time to indulge his passion for big game angling in Canada where he caught the biggest fish of his career - a 55 pounds salmon.
“They were great times,” continues Stanley.
“For me, that’s what the sport’s all about - the friendships, the travel, the memories. I do it for the sport, catch and release, and not for the fish themselves.
“Angling has given me a great life. I was 76 at my last international in Scotland just before Covid when we won the gold medal and I always loved competing in competitions.
“It was always about trying to come up with the right fly combination to beat your opponents; to me, that’s one of the great aspects of angling.”
For now, ongoing work at the Coleraine Showgrounds will keep him busy until the beginning of March when the angling season starts again.
“Come March 1, I’ll be away,” he laughs.
“The work here’s 99 per cent finished anyway.
“I’m not a football fan, though my son Adam played here at a time, but I can safely say there’s not another team in the country that’ll have the same facilities as these boys when it’s all done.”