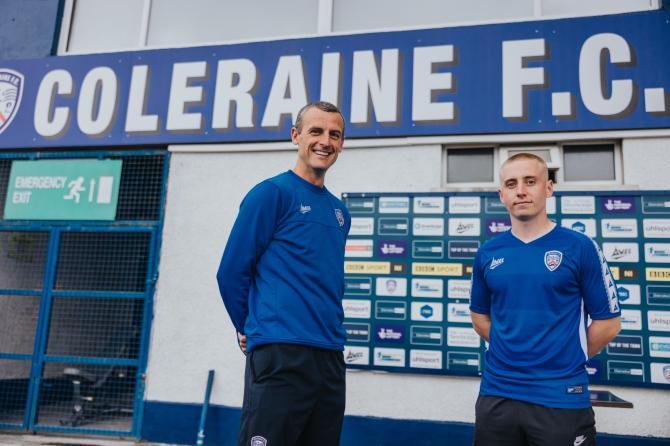 The Derryman has joined the Inver Park club for an undisclosed fee, ending a two and a year spell at the Showgrounds during which time he scored 37 goals in 86 appearances.

Moving in the opposite direction is exciting winger Conor McKendry, the 22-year-old putting pen to paper on a three year deal with the Bannsiders.

“We can compete with every club on the pitch but, sadly, full time football is not an option for us at the moment," said Bannsiders' boss Kearney.

"So when full-time clubs approach our players it becomes a dilemma, especially if the player has aspirations to be full time with the lifestyle that it presents.

"Once it became apparent that Ben was keen on the opportunity we have to do what's best for the club.

“After several days of intense negotiations an agreement was struck and Ben was given permission to speak with Larne last night, a deal that also involved Conor McKendry coming to Coleraine.

“In my two years working with Ben he has been a great lad, a top pro' and a pleasure to manage.

"He will be fondly remembered for that winning penalty in Maribor and we wish him well for the future," added the Showgrounds' boss.

Meanwhile, Conor McKendry, a former NI Under-17 international who made 14 appearances for Larne last season, is highly rated by his new manager.

"I've no doubt that Conor will excite our fans and be a joy to watch," said Oran.

"He started his career in England at Ipswich and returned home, but unfortunately suffered a bad injury.

"It's testament to him that he has bounced back from that and continues to impress.

"With our new pitch, I think Conor will fit into our plans perfectly and we are looking forward to working with him," he added.

Coleraine FC can confirm that McKendry will wear the number 7 shirt.