Lilian had the world at her feet after making history! 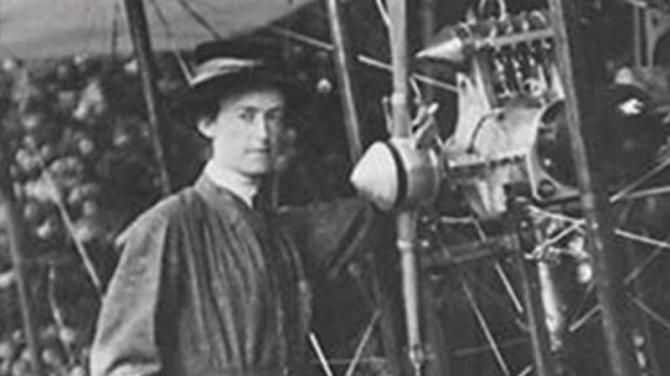 Lilian Bland certainly never lived up to her name. Indeed, it would seem the redoubtable Ms Bland was quite the eccentric.

Lilian led a colourful and eventful life, and has been quoted to have ‘gambled, drank and painted’.

Straying from societal norms, she also wore trousers and went shooting. Ms Bland tried to ride in the Grand National, but was refused on the grounds that she was a woman.

A sports photographer and journalist, Lilian took truly evocative photographs of hunting in action, capturing what one critic referred to as ‘muscle movements in horses unseen by the human eye’.

And then, of course, was her astonishing career in aviation.

She has also been credited with being the first woman in he British Isles (and perhaps, the world) to have built and flown her own aeroplane.

Inspired by Frenchman Louis Bleriot flying across the channel in 1909 (captured upon a postcard her uncle Robert had sent her), Lilian began her work on the Mayfly - named as such because it ‘may fly, may not fly’.

So keen to conquer the sky, Lilian travelled to England to pick up an engine which she promptly took home on the train.

Her great-niece, Imogen Holmes, described her as a force of nature.

“She seemed to be top of her tree in everything she did. She was always very successful. She had enormous energy. We all had to behave when she was around.”

Once home in Ireland, there was no petrol tank. Ever the pragmatist, she used an empty whiskey bottle and her aunt's ear trumpet.

It was barely longer than a cricket pitch, but only a little short of the distance Orville Wright flew on his first flight in 1903!

Lilian’s father was so concerned about the dangers of flying that he offered her a car if she gave up on aviation. She jumped upon the chance and would later become a car dealer!

The Bland family disapproved of what they saw as ‘unladylike’ jobs, and encouraged Lillian to marry her cousin in Canada.

Lilian’s entreprenaral spirit could not be dampened - as she helped her husband establish a farm on virgin land near Vancouver.

Lilian retired to Cornwall in 1955 and died in 1971 at the age of 92, yet her legacy lives on. It is perhaps fitting that she was buried near Land’s End.

In 2010, then Mayor Pam Lewis unveiled a plaque at Shane’s Castle accompanied by Lilian's grand-niece Imogen, and Brian Russell, grandson of Joe Blain who helped Lilian build her plane.

The ceremony was organised by Randalstown Historical Society.

The remarkable woman was commemorated by an Ulster History Circle blue plaque at the family home in Carnmoney. Glengormley Park was renamed Lilian Bland Community Park in August 2011. At the same time a stainless-steel sculpture of the Mayfly was unveiled.