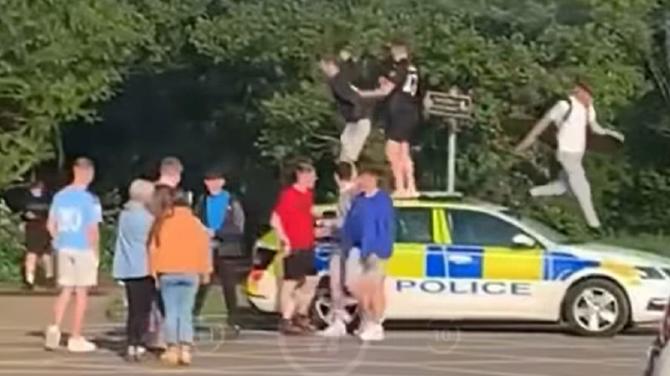 FOOTAGE has emerged of youths jumping on the top of a police car and stamping on it - as officers dispersed a larger crowd at Antrim Lough Shore over the Bank Holiday weekend.

At least three males were observed jumping on the roof and bonnet of the vehicle, who onlookers said were part of a much bigger group who were causing a nuisance at the beauty spot.

One of the teens (shown in the middle of the car’s roof in the picture, left), dressed in black football shirt and shorts, can be seen stamping on the car’s blue lights in front of shocked tourists before rejoining his pals.

Scores of people had flocked to the area to enjoy the sunshine over the holiday period.

Meanwhile, there were also separate disturbances in Randalstown over the weekend.

South Antrim MLA Trevor Clarke hit out at the those responsible for the Lough Shore trouble, explaining: “A video has emerged on social media of youths jumping on a PSNI vehicle at Antrim Lough Shore this weekend.

“It appears that a large crowd of young people had gathered in the area and police were in the area following reports of antisocial behaviour.

“I was shocked to see the video of such destructive behaviour over the weekend.

“I have been in contact with the PSNI regarding this who have urged anyone with any information to come forward.

“If you were in the area or can identify anyone involved, please come forward to the PSNI.

“Our young people need to realise the potential consequences of their behaviour.”

He added: “Antrim Lough Shore has become such a successful tourist location and it is a shame that foolish youths can ruin the experience for everyone.”

In an unrelated incident, Mr Clarke hit out at another incident of anti-social behaviour in Randalstown.

“I am deeply disappointed with what has happened this weekend at Neillsbrook View, it’s unfortunately a weekly occurrence that emergency services have to be called.” he said.

“The people of Neillsbrook are right to be frustrated - they deserve to live in peace.

“There are a number of residents in the new properties that choose to engage in outrageous anti-social behaviour which cannot be tolerated.

“I will continue to work with PSNI and Choice Housing Association to have these problems brought to an end.

“I urge residents in the area to report all incidents to the PSNI or even to myself privately and I will pass on the information.

“We need to ensure the PSNI are aware of everything to build their case.”