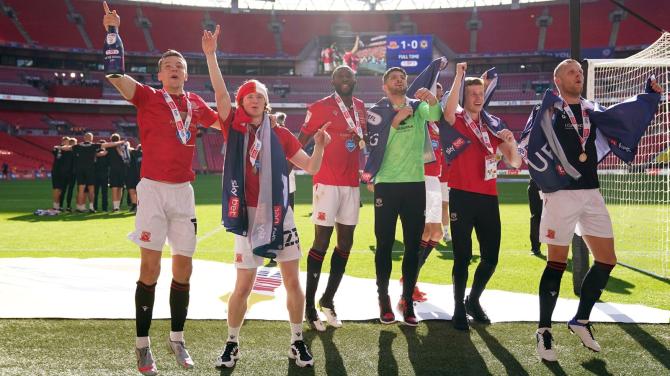 The former Coleraine man has helped Morecambe into the third tier of English football for the first time in the club's history.

They did it by beating Welsh club Newport County in Monday's League Two play-off final at Wembley.

Lyons, part of the Coleraine side which won the Irish Cup at Windsor Park in 2018, came on as a second half sub' for the Lancashire club.

And he played a key role as Derek Adams' side won 1-0 courtesy of a Carlos Mendes Gomes penalty in extra-time after the game had ended 0-0 after 90 minutes.

It caps a remarkable season for The Shrimps who have spent the last 14 years in League Two, with more than one close scrape with relegation along the way.

Morecambe will play in Sky Bet League One for the 2021/22 season, while Newport remain in League Two. Both divisions start up again on Saturday, August 7.

As for Ballymoney man Brad the future is less certain.

Released by parent club Blackburn Rovers, from whom he was at Morecambe on loan, he is effectively a free agent now.

It's believed a number of clubs have expressed an interest in securing his services next season.

No doubt today will help in the search for a new club.