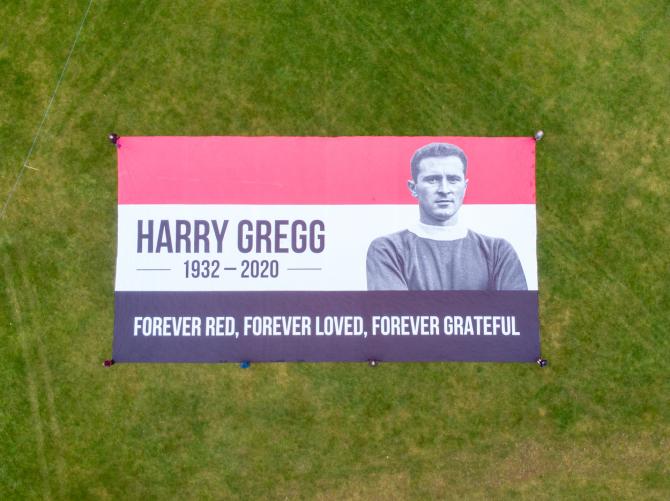 TODAY (Tuesday February 16) marks one year since the passing of the former Man Utd and NI goalkeeper, Harry Gregg.

The following is a statement on behalf of the Harry Gregg Legacy Project Steering Group.

'AS we approach this Tuesday (February 16) it will be the first anniversary of Harry’s passing and for those of us who were privileged to know him, it is impossible not to feel anything other than incredibly sad that the man who meant so much to us is no longer with us.

'Ever since his passing there has been an incredible outpouring of support from lots of people and groups wanting to remember Harry in various ways.

'A life size statue was mooted amongst many other suggestions and no one would have deserved it more but, if truth be told, Harry was never a 'statue' man - he wanted his legacy to be of the 'living breathing' type.

'Over the last few months, the family has identified a steering group made up of several partner organisations and individuals who are well on the way to establishing a Harry Gregg Legacy Project.

'We hope when complete the project will be the first of its kind in Northern Ireland and, to quote the man himself, we will inspire to help others to 'Dare to Dream.'

'The project will give children and local people the opportunity to participate in life changing youth and sports development programmes, whilst at the same time improving their social inclusion, education, economic outlook, skills, and job prospects

'We are extremely excited about what this project can offer particularly giving that Harry’s Foundation has a long history of working in partnership with the Ulster University Coleraine Campus on a range of community and student-centred programmes to maximise the opportunities for young people to participate in sport.

'And, of course, the University pitches come alive on a Saturday morning when thousands of children and their family’s descend to participate in the Harry Gregg Foundation Small Sided Games Centre.

'This week, on the anniversary of Harry's passing, members of the steering group gathered on the Coleraine campus playing fields to unfurl the flag in memory of Harry.

'Despite his global fame Harry always remained humble and completely grounded, he never attempted to court publicity nor sought personal glory and we believe that this project will provide a fitting tribute to Harry.'

* For more on this story, see Tuesday's Chronicle newspaper...