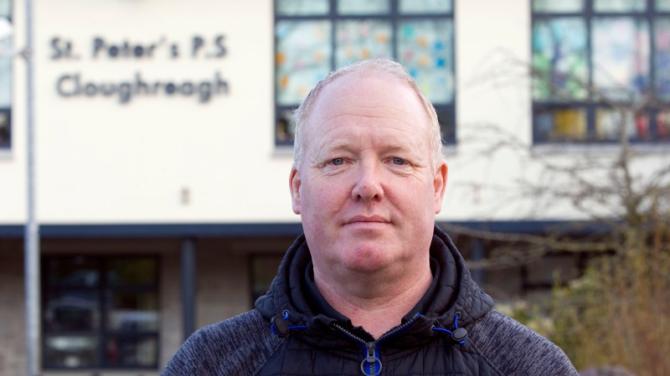 THE Principal of St Peter’s Primary School, Cloughrea has hit out at how the school have been left to deal with the confusion and worry about the outbreak of COVID-19 and the subsequent suspension of schooling.

Brendan Tierney has said the school community has largely had to improvise and make do as best as possible in the current global crisis.

“We were hung out to dry,” Mr Tierney told the Newry Democrat.

“We formed a group in Newry for teachers and pupils.

“It has hit education in a big way.

“But I have to say, whilst the schools have been given difficulties to deal with, the real heroes in all of this are the frontline healthcare workers.”

Mr Tierney also said that given the current state of the problem, one of the things it has shown is the importance of the health care system, and the job they do, here in Northern Ireland, and across the world.

“Our health service has been lambasted at times, but when all of this is over, we will realise what we have in it.

“What we have had to endure in the school is nothing to what they have.

“In this period of social isolation, it is what you make of it.”

He did say that despite the current difficulties, those involved in the school community have taken the opportunity to make the most of things, and develop their own capabilities.

“I have upskilled myself more in this period than I have probably in the last 20 years.

“We the teachers, are now getting the time to learn new things.

“We are still at work, even at times when we are not in the school.

“They have had to step up with the aspect of home schooling the pupils, and they have done that admirably.

“The building itself is a strange thing now.

“The children are missing school, in lots of ways, not just in terms of their education, but socially, and with regards their structure too.”

As well as his role in the school community Tierney is of course, a very popular sportsman.

He played inter-county GAA football for Armagh as their goalkeeper between 1989 and 2002, and featured for the Mullaghbawn club.

It was in that latter year that he was also a part of the Armagh side that clinched the Holy Grail - and lifted the Sam Maguire Cup, to crown them All-Ireland champions.

“They (the GAA) were the first to close down their games and facilities.

“I’m a sportsman, a sports fan too.

“We have seen that the sporting bodies, and clubs in the localities have been trying to do what they can to help.

“Sporting bodies have acted really well in all of this.

“They deserve great credit for the decisions they have taken.”

Tierney said it has been a tough time for supporters who have been without their sport to follow, although that has been with the greater good, the health of the public in mind.

He also added that whether or not to scrap events, would very much depend on an individual sport’s calendar.

“I mean if we are talking about the GAA championships for example,” said Tierney, “it is still very early days to be making those calls.

“The matches bring a lot of excitement, great crowds and a lot of teams base their whole year on that time, which is still at the minute, a bit of a way off.”

There is the question of what to do with sporting competitions around the world from the Olympics, to the remainder of the soccer season with League and European crowns up for grabs.

As well as that there is the issue of promotion and relegation, which can mean the difference of millions to the clubs affected.

“If we look though at something like Premier League football, it has to be finished.

“Liverpool deserve the title, but in light of health concerns, it is a hard one to call.

“One thing is for sure though, all sports have to come together as one in this.”