Harry a fighter to the very end 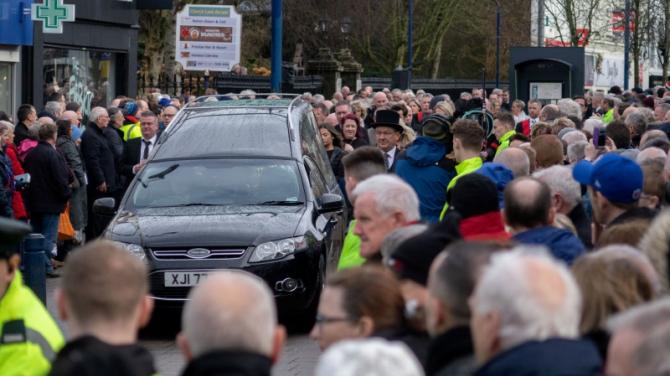 Coleraine town centre came to a standstill on Friday for the funeral of Harry Gregg OBE.WK09-048CR-SP

He fought to get a game for hometown club Coleraine and, when he got his opportunity, never looked back.

Transferred to Doncaster Rovers at the age of 18, his performances brought him to the attention of Man Utd, then, as now, one of the world's greatest football clubs.

Signed by Sir Matt Busby for a then world-record fee for a goalkeeper of £23,500, Gregg became an integral part of one of the most exciting football teams Britain has ever produced.

In later years and after finally hanging up the boots, he gave his name - and his blessing - to the Harry Gregg Foundation, a charitable youth organisation in his native Coleraine which encourages young people to simply enjoy playing sport.

Even in his eighties, he could be seen on the sidelines at the university, peaking out from underneath his peaked cap with a mischievous look on his face.

He liked a bit of mischief, did Harry. I think it was his way of not taking life too seriously, enjoying the craic as we say.

Many's the time he would ring me at work, just for a chat, to find out what was happening at Coleraine FC or in football generally.

The thing is, he always knew more than me!

He would often stop mid-conversation and ask - 'am I boring you?' - to which I would think, how can you get bored listening to tales from football's golden age?

I'll remember those stories this week as we all still try to come to terms with Harry’s passing.

But I'll remember, too, Harry's family, who are privately grieving for a husband, father, grandfather and great-grandfather, while publicly sharing our memories of a great man.

Yes, he could be difficult at times, but, then, can't we all? And when you've lived the life that Harry lived, you owe nobody anything.

He always maintained that he wanted to be remembered, simply, as Henry Gregg, footballer, from Windsor Avenue in Coleraine.

He will. But he will be rememberd, too, as a hero and a legend.

He fought the good fight.

*Read more on this story and a full 10-page tribute to the late Harry Gregg inside this week's Chronicle.