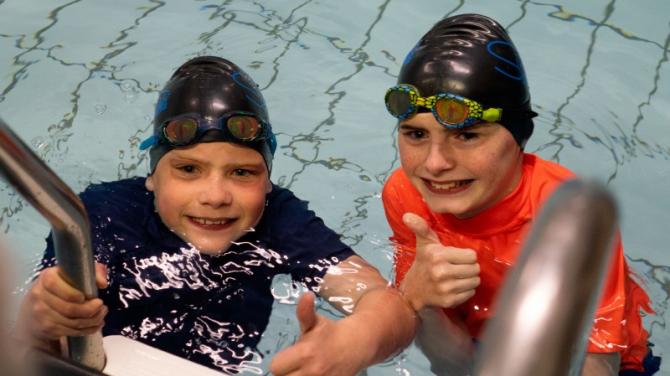 LIKE any parents would be, Charlene Dickey and Denise Pollock were filled with pride as they stood poolside along with their husbands last week cheering their sons Oliver and Ethan on to the finish line.

The determined duo completed their 21-mile charity swim at Coleraine Grammar School in front of a crowd of approximately 50 people and their parents admitted that the regular swimming has helped the boys no end.

Speaking to the Chronicle Charlene Dickey said: “Oliver has Cerebral Palsy, he was diagnosed just before his second birthday and we were told he would spend his life in a wheelchair.

“He wanted to give something back he is determined to help others and I am extremely proud of the boys because it would have been very easy for the boys to throw the towel in given the challenges that face the boys each day.”

Ethan's mother Denise also admitted her pride adding that she has noticed that Ethan has taken massive strides in the right direction since starting the swimming challenge over the past six months.

“Ethan had not done any swimming whatsoever before this and I am so pleased and proud at how far he has come,” admitted Denise.

“He needed one-to-one coaching and I contacted Sindy at Signature Swimming and she told me to bring Ethan along to see how he got on.

“Ethan and Oliver are best pals and they have had healthy competition throughout their journey and I really notice that Ethan's upper-body strength has really improved,” she added.

*Read the full reaction to this incredible story inside this week's Chronicle.