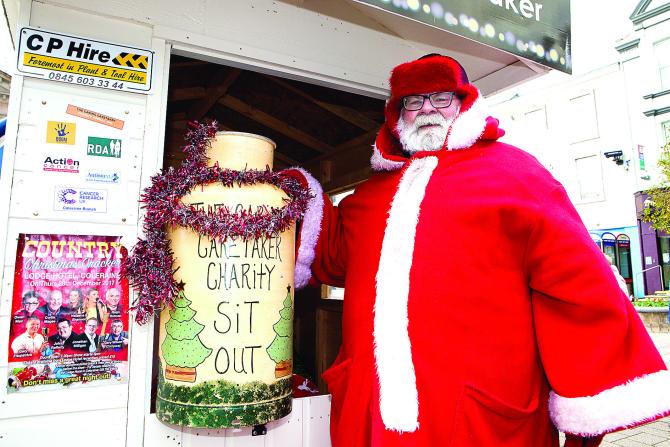 THE 'Caring Caretaker' reached a remarkable milestone this morning as he commenced his twentieth annual Christmas charity sit-out.

Over the last two decades, the annual fundraiser has helped to raise thousands of pounds for a host of good causes. Davy will be sitting outside the Town Hall every day, except Sundays, right up until Christmas Eve.

This year, the charities to benefit include the Samaritans, Prostate Cancer, Cancer Research UK, Age Concern Coleraine and the Community Rescue Service.

Speaking to the Chronicle recently, Davy Boyle outlined a grand sum which he strives to raise this festive season which will be added to the sum of £600,000 which he has raised over the years.

"I aim to raise £25,000 in the run-up to Christmas and hopefully the people of the north coast support me as they always do," said the 66-year-old.

December’s fundraiser completes a busy year for the former Coleraine Town Hall caretaker. A Jail n’ Bail event in the summer was followed by a charity breakfast in Coleraine’s Lodge Hotel which raised just over £3,000.

“Over 200 people sat down to breakfast while I was delighted to receive sponsorship from Colin and Jennifer Bond of Bond’s Jewellers.”