Lily lays a wreath in her father’s memory 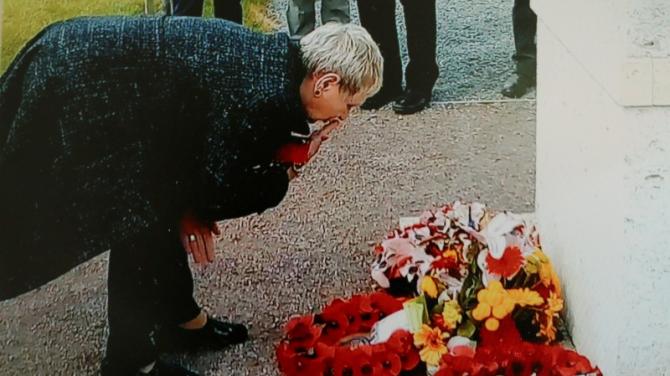 PORTSTEWART woman Lily O'Neill recently joined many from across the world who traveled to the Normandy beaches 75 years after the famous allied landings, laying a wreath where her father won the Military Medal for bravery.

Lily described the moment as “very emotional” remembering not only her beloved father, Lance Corporal Henry ‘Harry’ Staddon, but the other men who fought in some of the fiercest fighting of WW2.

Readers may remember two years ago in August 2017, The Chronicle reported the amazing story of how Harry's war medals were recovered by Lily's husband, Ballymoney man Billy O'Neill, MBE.

The medals had been missing for many years until a chance remark among family members led to a search, with Billy tracking down the precious heirlooms in Wales and buying them back.

Now Billy, who again took the lead, moving things along on another poignant step, said: “When I was informed that Ballymoney RBL were organising a trip to Normandy on June 7 and Rotarians were welcome I immediately booked two seats for Lily and I and it was a real experience.”

Speaking at her Portstewart home, Lily took up the story, saying: “I laid a wreath at the monument on Hill 112 remembering the divisions who fought there including the 53rd Welsh Division that my dad fought with.”