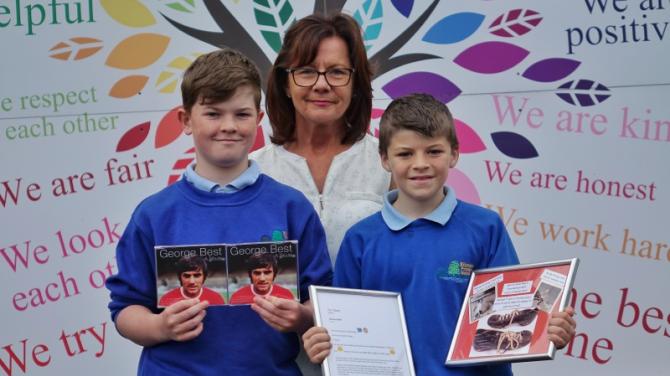 TWO local schoolboys enjoyed the trip of a lifetime to the National Stadium in Belfast recently for the grand unveiling of a bronze statue, erected in memory of Northern Ireland's adored sporting hero, the late George Best.

Kilmoyle Primary School P7 pupils Adam Moore and Charlie McKechnie made the trip to south Belfast on Wednesday, May 22, admitting that they were treated like royalty on the day.

Both boys share a passion for football and the Northern Ireland National team and said that being a part of the historic event was a “very special” opportunity.

Despite their tender years, the two boys have watched archive footage of George Best dazzling defences during his playing days for, English giants, Manchester United, and Northern Ireland.

Best was unique, recognised as the best in the world by Brazilian star Pele, amongst others.

The whole day proved a momentous occasion with both boys explaining that the memories of the trip will live long in their memory.