Electric Transit loads up on performance 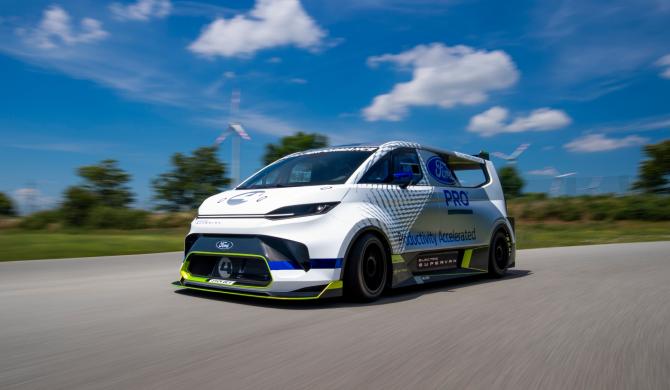 Ford has built a supercar beating van it says showcases the potential of battery technology and “underscores the company’s huge commitment to electrification”.

Powered by a 50kWh lithium-cooled battery, the four e-motors at each corner of the Ford Pro Electric SuperVan develop a combined 1,927bhp for a 0-62mph time of less than two seconds.

The working concept made its world debut at last week’s Goodwood Festival of Speed in the hands of Romain Dumas and ended up posting the sixth fastest time in the traditional Hill Climb.

Sitting on a purpose-built, track-ready chassis, the SuperVan is a modern day take on the company’s last Transit SuperVan effort from the mid-Nineties that was powered by a Ford-Cosworth Le Mans engine and featured bespoke bodywork and F1-spec aerodynamics.

The Electric SuperVan’s aggressive appearance consists of a front splitter, side skirts and rear diffuser on top of huge cutaways in the rear three-quarter. Inspired by the Ford GT supercar, the cutaways channel air to the rear wing to generate downforce in a straight line and through corners at high speeds.

To keep the body upright and deal with the huge stresses, there is a double wishbone suspension at each corner and motorsport-grade subframes, uprights and brakes.

Inside, the driver is protected by an FIA-spec roll cage in the case of an accident and can programme the Electric SuperVan’s torque and regenerative braking settings through the portrait-style touchscreen found in the Mustang Mach-E passenger car.

There is also one of five driving modes to choose from, with ‘Road’ aimed at “rare cases of normal driving” and ‘Track’ intended to maximise speed and cornering ability around circuits.

‘Drag’ guarantees maximum acceleration on racing radial tyres, ‘Drift’ makes it easy to go sideways in the SuperVan and ‘Rally’ is honed for use on gravel and asphalt special stages. The competition-themed touches stretch to a pit-lane speed limiter and launch control.

“The chance to be part of the iconic SuperVan story and reimagine what it could be in the 21st century was a dream opportunity,” said Amko Leenarts, Ford of Europe’s Design Director. “The fourth chapter of the SuperVan story is designed to be the fastest, most extreme yet while keeping the Transit DNA.

“The proportions are a more dramatic version of what we developed for the E-Transit Custom and the front light bar creates a futuristic expression, making the Electric SuperVan the absolute pinnacle of Transit design language,” added Leenarts.

Ford’s first SuperVan was revealed in 1971 and featured a mid-mounted engine taken from the Le Mans-winning Ford GT40 to create a Transit Mk.1 unlike any other.

The formula was taken further for SuperVan 2 which used a glass fibre version of the Transit Mk2 body that was draped over the monocoque and Cosworth V8. This vehicle was later reborn as the facelifted Transit Mk3 lookalike SuperVan 3, again powered by a Cosworth HB engine that was shared with Formula 1 cars of the era.