Davey Todd man of the meeting at Armoy 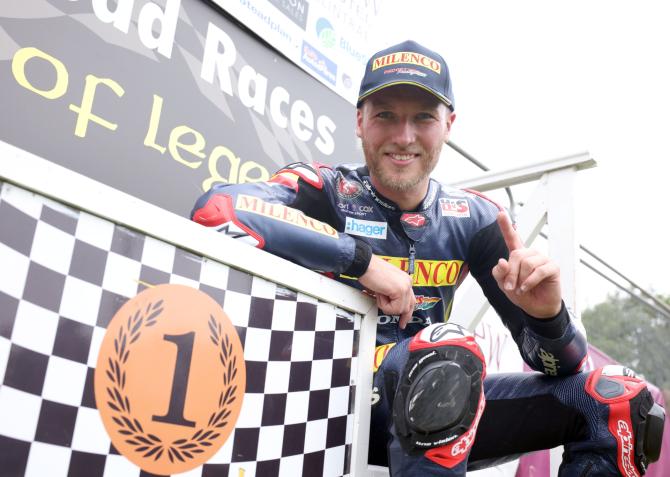 DAVEY TODD stole the show at last weekend's Bayview Hotel Armoy Road Races as he visited the top step of the podium four times on a 'mega' Saturday for the Englishman
Todd dazzled in both the Supersport and Superbike races and, for good measure, recorded a brace of new fastest lap times around the three-mile course.
The Milenco by Padgett’s Honda rider was uncatchable at the 13th running of the national meeting as he became the first new winner of the blue riband ‘Race of Legends’ trophy since 2011.
Rider turned road race team owner Ryan Farquhar was the inaugural winner of the title before Ballymoney’s Michael Dunlop stamped his authority on it nine times in a row.
Dunlop shocked the paddock on the eve of the event when he announced that he would not be attending for reasons he has yet to elaborate on.
Todd, though, did not allow the furore to affect his performances and simply got on with the job of winning silverware for him and his team.
“I had an awesome weekend at Armoy - I thoroughly enjoyed it,” the Man of the Meeting told Chronicle Sport. “I can’t ask for more in terms of results, and I definitely didn’t expect to be going home with the lap record.
“Hats off to my Milenco by Padgett’s Honda team who did an awesome job all weekend preparing some awesome bikes for me to ride.
“Also, amassive thanks to the organisers for running a mega event,” he continued. “It was awesome to see all the fans who came out to cheer us on right untill the end, so thanks to everybody who came out to support us.”
The schedule on Saturday was delayed by a number of red flag incidents, but no serious injuries were reported to any of the riders involved.
Clerk of the Course Bill Kennedy said that he very happy with how the event ran overall. “We went out on a high. It was a long two days, and I can’t thank all of the riders enough that came and put a show on for the fans,” he said.
“There was not a bad race in it, it was a great day of racing from riders, near and far. You just have to look at the top ten riders in the Bayview Hotel Race of Legends and every one of them are great riders.
“I’ve had some feedback from the visiting riders who were here for the first time, and they just loved the circuit but what made it really special for them was the reception from the fans when they slowed down. They could hear them clapping – everyone felt very welcomed and said they can’t wait to be back here next year,” he added.
Meanwhile, it has been confirmed that Dunlop will race a Team Classic Suzuki GSX-R750 SRAD at this year’s Manx GP, which takes place from 21-29 August on the Isle of Man. Alongside Dunlop, Team Classic Suzuki will support Phil Crowe who will ride one of the team’s XR69s.