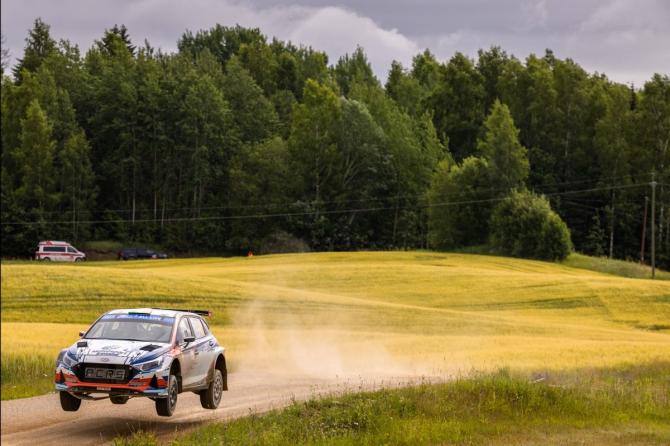 Motorsport Ireland Rally Academy driver Josh McErlean will tackle his fifth FIA World Rally Championship round of the 2022 season this weekend, as he heads for the iconic Secto Rally Finland (August 4-7).

The Hyundai Motorsport Customer Racing Junior Driver heads to the high-speed jumps and blisteringly fast gravel of the fondly named '1000 Lakes` for the first time in his career, fresh from a WRC2 Junior podium last time out in Estonia.

Rally Finland is one of the flagship events in the WRC tour and the 23-year-old from Kilrea has been looking forward to contesting the unique event since the start of the season and is eager to put his experience from Estonia to good use on the undulating and unforgiving rapid Finnish roads. Along with co-driver James Fulton, the duo will be aiming to build on their positive season so far.

“I always feel very privileged when I think about my campaign this season and coming to Rally Finland is a real `pinch me moment,” says McErlean.

“It’s the most iconic rally that I'm likely to contest this year and has classic stages with incredible roads. In a way, our approach to the rally is directly relevant to Rally Estonia in as much as the roads are high speed and have little margin for error, so we are in the right mindset for sure. The aim is to start Finland where we left off in Estonia.”

Despite the Estonian and Finnish roads often regarded as the most similar on the WRC tour, just a few weeks separated the two rounds, giving little time to re-prepare his PCRS Rallysport run Hyundai i20 N Rally2 for the event.

With torrential rain and brutal conditions in Estonia on the final day, a penultimate stage roll could have derailed McErlean’s third place in the Junior WRC2 category, but the young ace battled on to finish the final test without a windscreen, securing the all-important finish.

However, the additional work to prepare the car for Finland has seen the PCRS squad work tirelessly to make the Hyundai `match-fit` once again, just before the team head for a pre-event test ahead of the rally itself.

“PCRS has done an incredible job of getting the car re-prepared in time” explains McErlean.

“Every one of them has worked in an overdrive mode and I`d like to say a huge thank you to all of them for their efforts. Behind the scenes, we have all been working hard to be as prepared as possible for Finland as we know that we cannot afford to be complacent.

“Support from the Motorsport Ireland Rally Academy as always has been second to none and James [Fulton] has been putting in many hours too. The whole team have put serious effort in for this coming week and we are all eager to reap the rewards of our energy”.

McErlean currently sits eighth in the WRC2 Junior standings with Fulton leading the charge. However, with 24 entries in Rally2 machinery, it will be a tough prospect to repeat his Estonia podium.

“The rally is one of the toughest in the world and we will be lucky to get another podium on my first ever trip to Finland. The guys competing at home have a huge advantage here, but we have some testing planned to get bedded in and dial into the unique nature of the roads.”

“It’s a childhood dream to compete at Rally Finland. It won’t be easy, but I want to enjoy the challenge ahead and keep building the experience and mileage as part of my career progression.”

Secto Rally Finland is based in Jyväskylä, offering over 322 kilometres of competitive action spread over 22 special stages and four days. The rally kicks off on Thursday night with a Super Special before the rally proper on Friday.