Richard Turtle Memorial Cup up for grabs at Aghadowey Oval 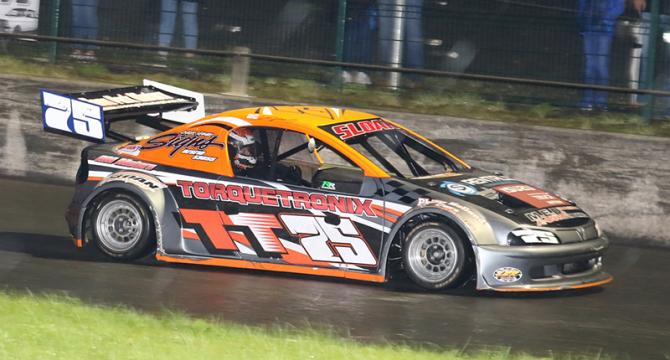 THE Richard Turtle Memorial Cup, held annually in memory of the popular Cullybackey Hot Rod racer, heads the programme of oval racing at Aghadowey Oval this Saturday evening, October 10.
There is a full five formula bill of racing planned for National Hot Rods, Stock Rods, Lightning Rods, Ninja Karts & Back to Basics Bangers.
Racing for the coveted Richard Turtle Memorial Cup will be the province's premier formula, the National Hot Rods.
Dick Turtle, as he was better known, graced the formula for many years during the 70's,80's and 90's before his untimely passing a few years ago, taking many victories at both Aghadowey and his local Ballymena Raceway.
Templepatrick's Ben McKee is the current holder of the trophy, and he will be keen to successfully defend it having had a great season in his Mercedes SLK.
The event will also double up as Round 6 of Simpson Race Exhausts World Series NI, and Dungannon's Derek Martin currently tops the standings after a great recent run which saw him take a heat and final double just two weeks ago at Tullyroan Oval.
Kells driver Carl Sloan has also tasted success in recent weeks, whilst Ahoghill's Ulster Champion Shane Murray, British Champion Glenn Bell and the popular John Christie will also be in action.

The Stock Rods are arguably the most competitive formula on the local race scene at present, and picking a winner from the packed grid could be nigh on impossible.
World, European, British and Irish Champion Derek McMillan tops the entry as always, but Ballinderry's Jonny Cardwell will be keen to follow up his win in the recent William Cooke Memorial Trophy with another victory.
Cullybackey's Rick Purdy has shown well of late too, as have Dan Shannon, Shane McMillan, teenager Adam McFall and his father Micky.

BACK TO BASICS BANGERS
Providing the bash and crash entertainment at the meeting will be the Back to Basics Bangers, which as always will be real crowd pleasers.
As the name suggests, these are easily prepared cars with just a few simple safety modifications to help newcomers get their first taste of short oval racing.
Matthew Nicholl, Josh Goligher and Jake Macnicol are sure to be in the midst of the action.

The Lightning Rods contest their King of Aghadowey crown, using the reversed grid qualifying system to determine the starting line up for the final.
World Champion Nigel Jackson has been on top form of late and will be the benchmark for the others, including fellow Portadown man and British Champion Jordan Rochford.
Aghadowey's Richard Stewart, his cousin Aaron Stewart, Antrim's Ricky Shaw and Strabane's James McKinney will be others vying for glory.

The young 6-11 year old stars of tomorrow in the Ninja Karts complete the line up, with Antrim's Irish Champion Leyton Hughes the star attraction.
The young drivers really do know how to thrill the crowds, and some great action will be served up.
Belfast's Caolan Fegan, Banbridge ace Noah Teggart and Crumlin's Riley Dawson-Stirling will be ones to watch.
The first race of the meeting, kindly sponsored by McKinstry Metal Recycling of Mallusk, blasts off the grid at 6.30pm.
Strict Coronavirus guidelines will be in place at the venue, please visit www.dmcracepromotions.com for further information.