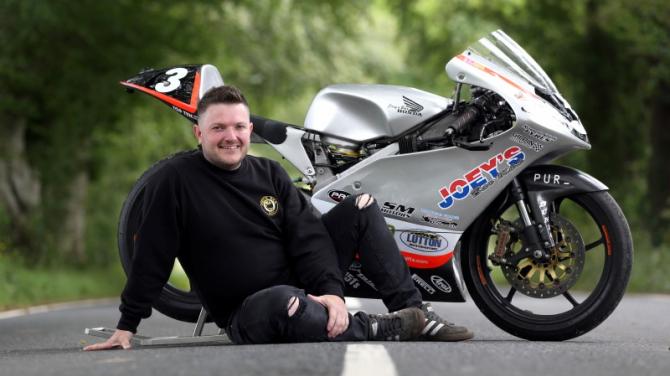 TWENTY years on from Joey Dunlop’s last ever Superbike victory at the Ulster Grand Prix, the famous Honda RC45 machine is set to grace the Dundrod once again.

Joey’s son Gary is set to take part in a special parade lap around Dundrod next month. He will ride the famous silver and black Honda his father raced to victory against David Jefferies at Dundrod on that mementous day in 1999. Manxman Conor Cummins will also ride Jefferies’ V&M R1 Yamaha in the tribute.

Described by many as Joey’s greatest ever win, the Ballymoney man produced one of the greatest ever performance around the 7.4 mile circuit. Down but not out, Joey put his Honda to the test against the brand new Yamaha R1 machines, which were said to be untouchable at the time, and, like many times before, proved why he was the ‘King of the Roads’.

“I am really looking forward to having a run around Dundrod on the RC45,” Gary said as he visited the Dundrod circuit on the 19th anniversary of his father’s passing.

“I was at the Ulster in 1999 and it was a great day’s racing. The big bike race was unbelievable and I knew dad would win because he just had that look on his face.”

*Read the full story inside this week's paper.