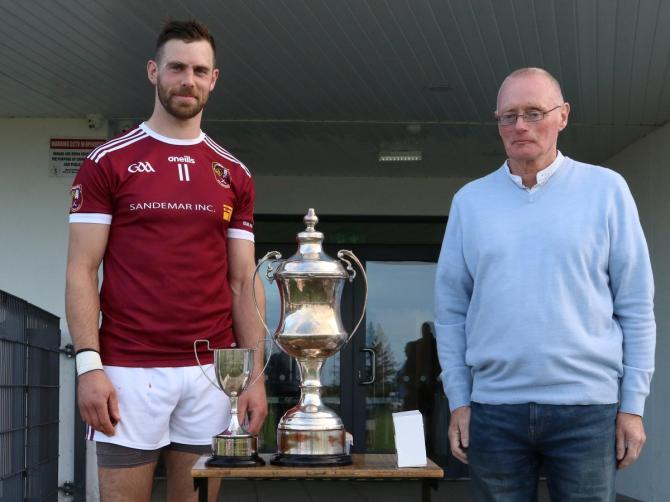 Neil McManus is presented with the Feis Cup by Sean McKendry.

IT might be somewhat out of date, but last season's Feis Cup final between the 'Dall and 'Castle gave some glimpse of what lies ahead after a six month lay off during which the 2020 Feis was cancelled.

Played at Glenariffe, there were obvious signs of rust from both sides, but hurling fans in the Glens must be delighted that hurling activity is back on the agenda.

Cushendall started the game like there was no tomorrow with four quick points from Alex Delargy, Eoghan Campbell, Neil Mc Manus and Ryan McCambridge before the Town broke their duck from a Ciaran Clarke free in the tenth minute.

They doubled their tally a minute with James McShane on target,but Neil McManus soon began to stamp his authority on the game. He first pointed a free and after Christy McNaughton had been upended in the square he blasted the resultant penalty home.

He continued the good work with a tidy point from play and then turned provider setting Ryan Mc Cambridge on his way for his second point of the game.

Ciaran Clarke stopped the rot for the McQuillans with a free before he traded scores with 'Dall full forward Dominic Delargy.

McManus followed with another couple of points, one from play and one from a free, to put Cushendall well in control but The Town hit back as Dirmuid McShane clipped over a point from an acute angle before Ciaran Clarke rounded Stephen Walsh to then beat the diving Conor McAllister.

As half time approached there was just enough time for Paddy McGill and James McShane to trade points leaving the Ruairi Og men well in charge at 2-10 to 1-6.

There simply was no holding Cushendall and they again exploded out of the traps with a goal and three points without reply. Christy McNaughton cracked home a goal and point with Ryan Cambridge and Aidan McNaughton on the end of the other two.

Just when it seemed the 'Dall were well out of sight, a battling Ballycastle side came back with a bang. Dirmuid McShane slipped under the cover of the opposition defence to finish to the net for an excellent goal with Ronan McCarry tagging on another point and they loked very much back in business.

However, Cushendall were having none of it and snuffed out the McQuillans challenge in a flash when the mighty McManus won possession, beat his man and from twenty metres blasted past Benny Connor for a superb individual goal.

In the closing stages with the game really over as a contest but both sides continued to played some good hurling.

Cushendall had further scores, Christy McNaughton hitting a goal and point with McManus, Dominic Delargy and Scott Walsh adding singles to take their final total to 4-19.

Ballycastle likewise improved their position adding points from Clarke and Lorcan Donnelly, but at 2-14 they came up eleven short.

Nothing has changed it seems, Cushendall once again serious contenders for another Volunteer cup title while Town, while they will have good days, still looking well off the mark.

The winners played some really good hurling for long periods but found this youthful Ballycastle side tough to shake off. In defence Paddy Burke marshalled well from centre half back and Ryan Cambridge was also on top form.

Eoghan Campbell was the pick of the midfielders and up front Christy McNaughton was always dangerous with Neil McManus contribution of 2-8 making him man of the match.

For this young Ballycastle team it was a steep learning curve but the game will have done them the world of good. Cormac Donnelly, Ciaran Clarke and Diarmud McShane were most impressive.