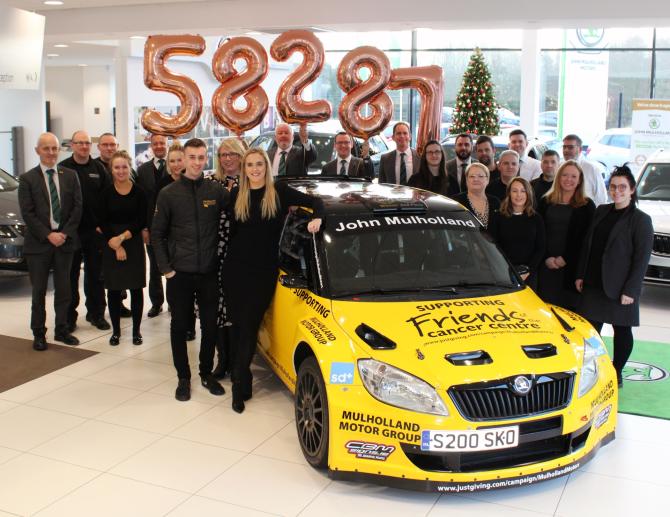 Shona and Johnnie Mulholland with Ana Wilkinson, Corporate Fundraising Manager for Friends of the Cancer Centre and members of the John Mulholland Motors staff.

THE DAUGHTER of a well-known car dealer who passed away earlier this year says raising almost £60,000 for a cancer charity in his memory is a "bittersweet moment".

After being diagnosed with kidney cancer in June 2018, John Mulholland sadly lost his battle to the disease back in August. As well as being a popular and well-liked businessman, the 55-year-old was an avid motorsport enthusiast.

Since then, Mr Mulholland's son Johnnie and daughter Shona have been working to raise the life-changing sum with help from staff at both their Campsie and Randalstown showrooms.

“We are thrilled to hand over the huge sum of £58,287 to Friends of the Cancer Centre, although it has to be said this is a bittersweet moment but also a fitting tribute to dad," said Shona.

"Dad lived by the motto of, "support those who support you", and it was imperative for him to back a local charity, and one that offered us unquantifiable support throughout dad's illness."

Mr Mulholland's family initially wanted to hand over £40,000 to the Friends of the Cancer Centre by the end of this year but far exceeded that. The latest fundraiser - a Targa Rally that was organised by North Ulster Car Club - raised £14,000.

“We set a target of £40,000 and in true John Mulholland fashion we are delighted to have exceeded that," continued Shona.

"I cannot articulate the good this charity does for families across Northern Ireland. Dad made the decision for our fundraising to directly benefit nursing hours - a topic that hasn't left the news all year. We could not have done this without the support of our fantastic customers, our fully engaged staff, family friends and also the North Ulster Motor Club.

“It has to be said when signing up with Friends of the Cancer Centre this time last year, we could never have imagined the fun we would have while fundraising and how proactive our staff have been about raising awareness and funds for the charity."

“As a charity that relies entirely on the kindness of individuals and companies such as John Mulholland Motors to fund our work, we are overjoyed to receive such a donation."