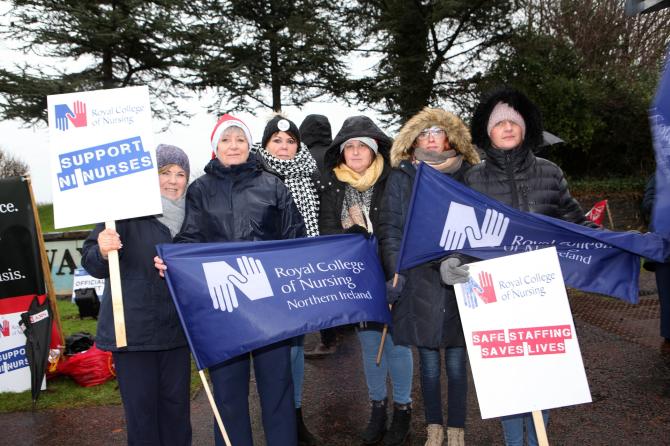 Nurses pictured picketing at the Causeway Hospital on Wednesday. WK52-04TM

LOCAL NURSES are among an estimated 15,500 who are striking today in a dispute over pay.

A 12 hour strike by Royal College of Nursing (RCN) members, of which there are about 9,000, is due to end this evening at 8pm.

They are demanding the same pay as their colleagues across the water in England, Scotland and Wales.

The lack of a sitting Assembly has added to the problems. A 6.5 per cent pay rise over three years was agreed in 2018 by unions but it could not be rolled out in Northern Ireland due to the absence of a devolved government.

In a show of solidarity approximately 5,000 Unison health staff members, are staging a 24-hour strike.

"This strike is about more than pay," said the former Northern Ireland Justice Minister.

"It’s about ensuring the safety of our hospitals, patients and staff."

"This action could have been avoided had the two main parties formed a government and took the necessary ministerial decisions to support our health service and our nurses," she added.

"Political parties have been on strike for nearly three years. Shame."