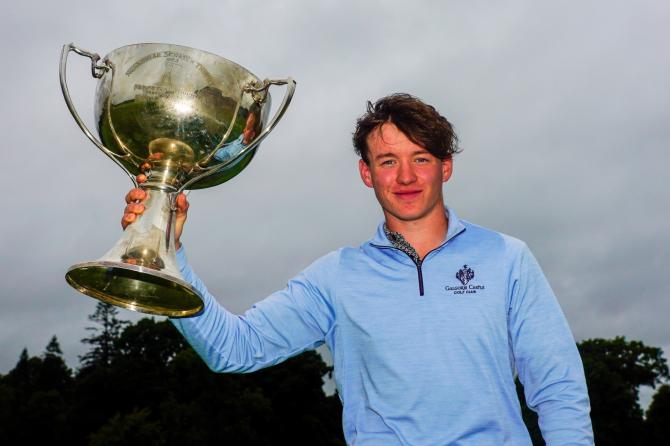 On a wet and dramatic day in Mullingar, Hill finished one clear of Royal Dublin's Max Kennedy and Portmarnock's Brandon St. John (-7). Connemara's Luke O'Neill finished a shot further back on -6.

Despite an impressive 66 in the morning which left him five clear going into the afternoon, only six players shot worse that Hill's 78 in the afternoon, as he needed a birdie on the last to win.

+3 through the turn in the afternoon, Hill has successive double-bogeys on 12 and 13, as he looked set to miss out on an excellent opportunity to win his first Men's Bridgestone Tours event.

The form of Kennedy and St. John didn't ease Hill's nerves, with the duo going low in the afternoon with rounds of 66 and 68 respectively.

Playing together, the two Dubliners impressed in the final holes, with Kennedy birdieing his final three holes, and St. John eagling the last, to try and force a play-off.

A poor approach shot from Hill on 18, meant a play-off looked likely, but a brilliant chip from the back of the green, resulted in a tap-in birdie for the win.

Speaking after his win, Hill said; "It had a few unlucky breaks this afternoon, and the weather didn't help either. I was nervous coming up 18. The adrenaline was pumping, and that's why I went long over the green.

"I cant believe I came back to win. I thought I threw it away after 12 and 13, but knew I had a small chance by keeping an eye on the leaderboard. I'm just happy to get over the line."